I imagine that's what it would feel like, sitting in your tent right in the parking lot, staring at the road and hundreds of other tents.

It's amazing to me that this place is booked often and hard to get into.  I was *lucky* enough to call when there was a cancellation, and booked spot #114.  Previously, Mr Snork had booked spot #94, but after paying we discovered it was a handicapped acc. spot, and you need to have a placard to check in. When I called to change the reservation, I was SO excited they had another spot that I took it, and considered myself lucky.  All the rest were booked.  Because, clearly, it's an awesome, super popular place.

Then I read some Yelp reviews.  (2.5 stars, I believe)   And then giraffy chanced upon some google images, and we started to have doubts that two tents could fit.  She has an 8-10 person, I think.  I have a 6 person with vestibule, so the footprint of an 8-10 person.   My other camping friend has a backpacking 2 person tent, so, presumably, she and her husband can camp in a tree if needed.  No concerns there.

Unless, I get this: 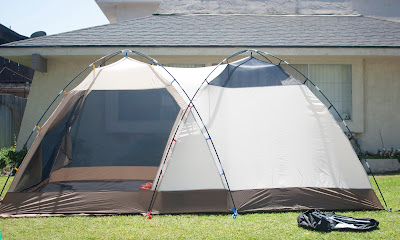 But let's rewind.  Spot #114 is actually one of the better spots.  Spot #113 next to it is the campground winner, with it's own little island of dirt and bushes.  And a faraway ocean view.  It could be bearable.

But let's talk about spot #94, the original reservation.

That is a wall of dirt behind it.

And climb it you'd have to, to see any ocean.  Which is far, far down below. 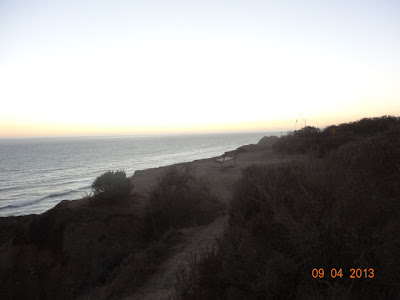 The bench is a nice touch.

I guess the description does say you're in the bluffs.  But I feel the description should, somewhere in there say - "waaaaay closer to I5, and railroad (practically on top of) than the ocean.

You would for sure not hear the waves.  But you do hear the I5.  And, I imagine passing trains.  The google images we had seen made it look bad, but you must realize that is actually much worse in person. 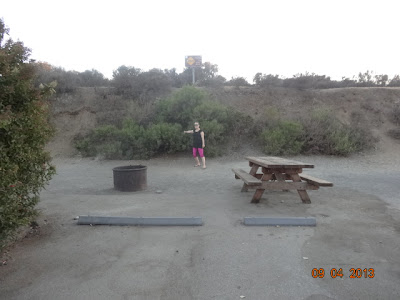 The depth perception is off in this photo.   It looks much larger than it is.  I'm standing maaaaay be five feet from the picnic table, and I'm touching the Dirt Wall Bushes.

I consider myself a pretty flexible camper.  I don't need bathrooms.  I don't need showers.  (They have flushable portapottys and cold outdoor showers).  I'm pretty excited when there's just a water spigot in the vicinity and a view of some sort.  And, I guess, a place for the tent.

So, back to spot #114.  Which, to be fair, has ocean view.  And instead of a wall it has a drop off, which I guess is a little better.  Unless you have a 2 year old to keep track of.  Which I do.   There's also one of may be 3 trees, in the whole campstrip, hanging right over the table.  Good for shade. 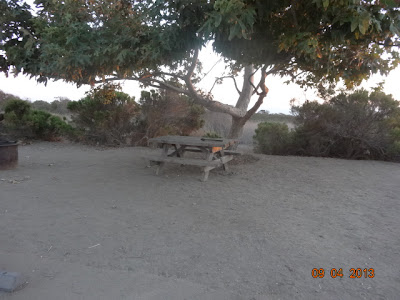 That picnic table there is chained into the ground, with about 6" of slack.  And is placed in the most inconvenient spot.   I *think* I could fit my tent sideways, in front of the picnic table.  Right in between the two fire pits. and in front of my car, possibly touching the picnic table and car.  There would be no room for a second tent of any size.  Or any room for Mouse to roam.  It was hard enough to keep her away from the fire pit at O'Neill park, with its vast space, trees, twigs, and pebbles (and passing horses)  to play with.  I'm pretty sure keeping her away from the firepit with only the immediate 5 feet of dirt around it available for play would be a weekend's job on its own.

I think what I'm really getting at is that you can't go there with children.  Once you pitch a tent, small as it may be, the play area is SEVERELY limited.  You're between a wall (if you're lucky) or a drop off, and the road.  With firepits everywhere.  And picnic tables.

It makes me sad that the state is so greedy, they stuffed all these "camp" spots in this place.  Had they reduced the number of camp spots, it would still not be ideal, but at least, you could spread out laterally, pitch a tent not on top of the firepit, and have some space.  But California is greedy and has money management issues, so, they would rather stuff you like sardines into a dirt patch, and disclose very little about it online.  I notice other, actually nice places have things like thumbnail photos of each campsite.  San Onofre doesn't, because nobody would show up.  Instead, they have a very vague and inaccurate map, and advise you that "depending on size, 1-3 tents fit per site".  No site there fits 3 tents of any size.  They are liars.

I read in some reviews that spots 1-10 were the best. 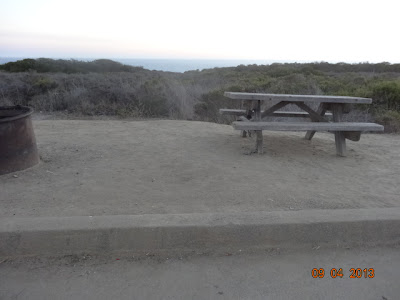 I liked them.  The view is nice (note lack of dirt wall), you don't have drive far into the flea market - like jungle, but you do need a 2 person tent to pull it off.  And, as anywhere else on this campground, you have to cross fingers that yours or neighbors' fire pit sparks don't ruin your tent.

Some other considerations:  smoke -  you know how you end up shifting around campfire depending on where smoke is blowing?  Well, here you can't.  There's probably a tent, a picnic table, or a vehicle next to you.

The beach - is a hike.  It's pretty, and I bet it's great when you get down there.  Lots of rocks I hear.  Very little sand.

Noise - It's like camping with 90 people at once.  I can't even imagine.  The reviews agree.

Conclusion:  I think a couple spot in the place (1-10, 66, 113) could be nice.  For a couple, a small tent, a little getaway by the beach with ocean view.  Especially if you plan on going down to the beach for most of the day.  (Will people steal your stuff while you're gone?  Probably.)

Most of the other spots are like a camping version of prison.  Some actually back up to chain link fence.  Which isn't a huge deal, but when your camp spot is 7 feet wide.. it takes away from the scenery.  Also, the park is a liar.  Their map is crap, and I feel they intentionally mislead people.  I hope that more photos of this depressing little dirt patch crop up on the internet, so that people know to plan elsewhere.

UPDATE:  Reserve America will apparently refund your cancellation fee, and your reservation fee if it turns out that you can not physically fit your tent in the spot.  Good.to.know.