Last year, I used McCalls 6238 for the Alice in Wonderland dress, it was a great little template dress, and when I went to look for it this year (because I cut out size S, and now need a L) it has gone out of print, and no JoAnns in SoCal had it.  I even checked the Palmdale desert JoAnn's.  That's commitment. 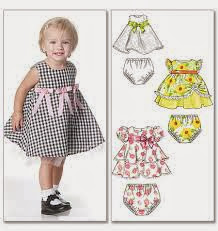 So, while I ordered it online to keep for a future project, I had to find a new little dress.  I wanted simple lines, raised waist, and lined.  There were a couple options, and I settled on Butterick 4434, even though I think their envelopes are kind of plain, I have very little of them in my stash, and tend to pick them last.  I'm shallow like that. 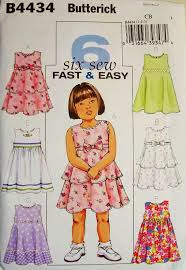 Enter the Pottery Barn Kids Pumpkin Fairy dress that I saw at the mall, and WANTED,  and found the $80 price a little hard to swallow: 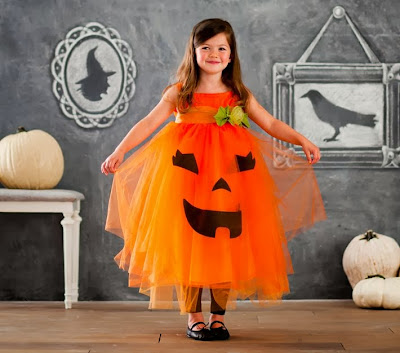 It did go down to $69 on clearance.  But, it turned out that tulle is the cheapest fabric EVER, so I took my $80 to JoAnn's and spent $17 of it on supplies for this dress.  The end. 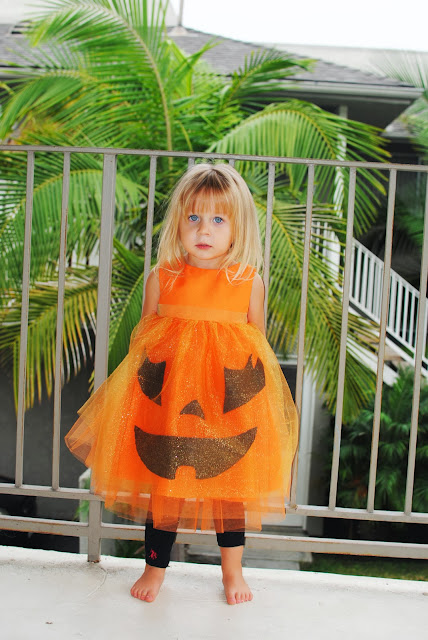 It ran large, according to the measurements, Mouse is a size 2.  But a size 1 fit her with few inches in the waist to spare.  I had read that on PatternReview, but tested it with a muslin, just in case: 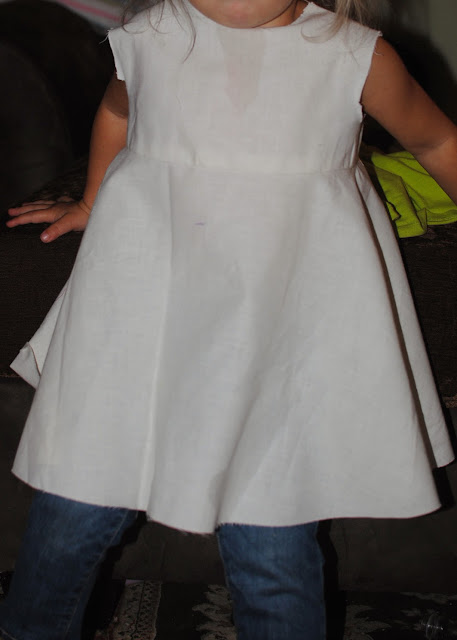 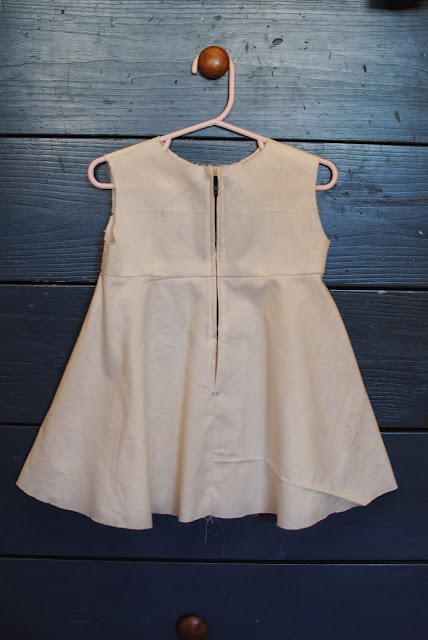 The hardest thing about making a muslin is trying to get a child into it.  She's OK trying on 'pretty dresses' but it took a couple cookies to try this on, thankfully it calls for something like a 35" zipper.  Easy kid insertage guaranteed.

I had a hard time sewing the placket in the McCalls dress, and it had come out less than perfect.  But, an invisible zipper on this dress worked like magic.  I think the pattern calls for a traditional zipper, but, invisible is just as easy.  I find each time I sew it, it keeps getting more and more invisible.  Skills, yo. 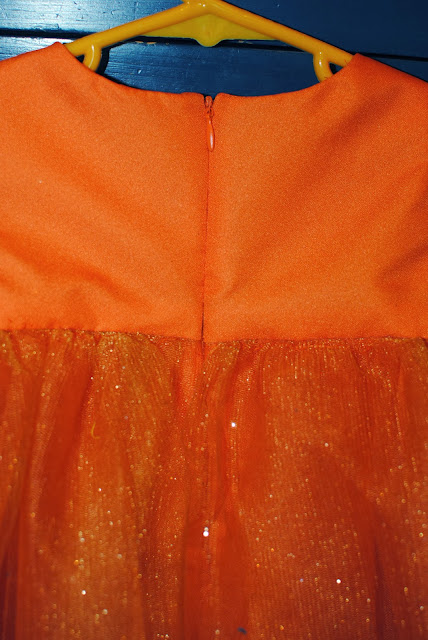 Felt applique? Check.  Beads and Swarovsky crystal?  Check.  Hand stitching detail?  Check.  This dress has all of the hobbies I want to dabble in but don't have the time.  And, it was fun searching Pinterest for felt flower ideas.  Did you know that if you tri fold three circles and put them side be side they make a flower? 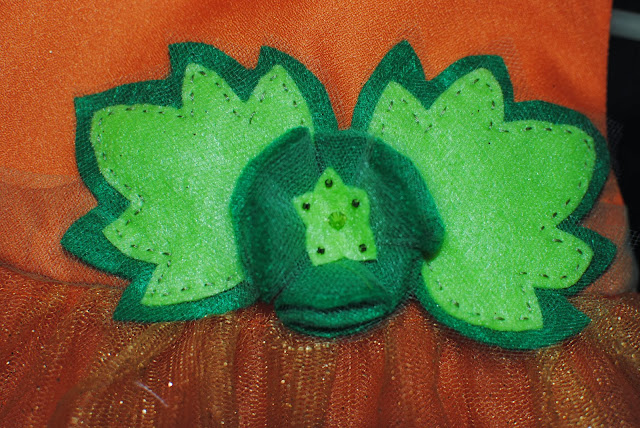 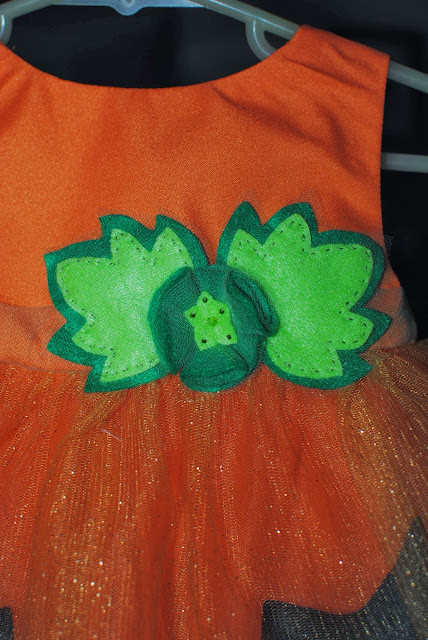 I bought 4 yards of orange tulle and 2 yards of sparkle yellow tulle and the dress has 5 layers of tulle gathered on top of the skirt and treated as one piece with skirt.  There's a green tulle sash, behind the applique, but it's hard to see in the photo.  I used some silky poly for the body of the dress, and had to interface the top, or the middle seam would bulge through it, with all of its million layers of gathered tulle.. 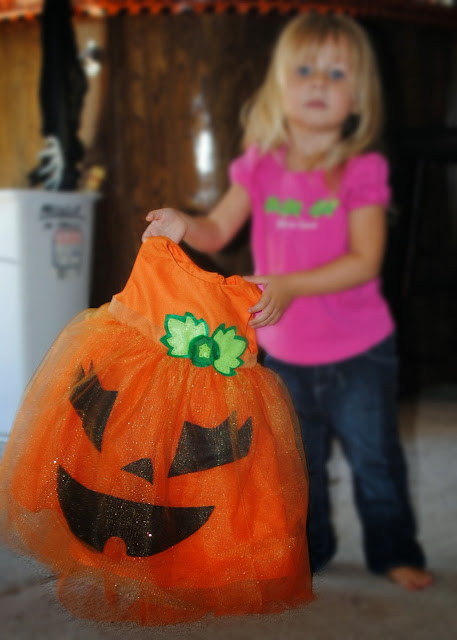 Mouse is pretty fond of her dress.
When she's not wearing it, she carries it around and pets her 'pumpkin dress'

The dress was super easy to make, few hours including cutting time and tiny babies underfoot.  Although Mr Snork does an absolutely admirable job of keeping them out of my hair while I sew, which means keeping Mouse away from scissors and 'helping', two things she is completely obsessed with, both together and separately.

Most of the time got spent hand sewing the applique, the felt eyes and mouth, and arranging them on tulle.  I think this is a great template dress, that could be embellished in various ways for a flower girl, a costume, etc.  I'm thinking about stitching on a spirl-y tendril..  Can you do too much to a pumpkin dress?  I don't think so.

The semi circle skirt is twirly and girly, and the zipper is hidden behind the lining in the back of the dress.  I used french seams on the skirt, and that with lining and invisible zipper makes it look like a RTW garment, which I like.  If you went ahead and lined the skirt, and used this tutorial for no-hand-sew lined bodice you could have a complete machine sewn dress. 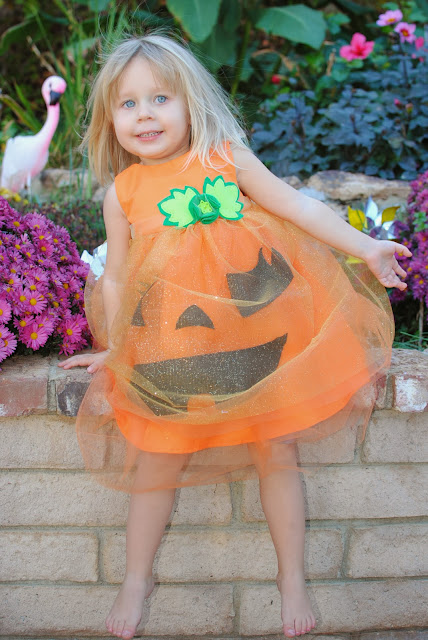 As an added bonus, all the leftover tulle went into a 20 minute matching tutu for Littlest.  I have some red dupioni laying around, and I might use this to make Mouse a Christmas dress.  I have 8 million patterns, but when I find one I like, I just use that one over and over until I run out of size range.  Ha.

Posted by Snork Maiden at 20:56 No comments: