The Nesting Mode is a Terrible Thing

When you have ADD.

We got back from our late honeymoon, and the long stay at the hotel has inspired me.

.. To throw away everything I own.   There's something about living in an empty hotel room, out of a bag with 3 dresses (and 9 bathing suits) that was really, really appealing.   This seemed really simple until I got home and remembered I really *like* all the crap I have.  But, my God.. there's so much stuff.

So far I have simply resorted to randomly throw away various pieces of clothing as I fold laundry.  I have to be quick about it, because if they linger in a plastic 'donate' bag by the door too long, I eventually talk myself into keeping it for refashioning, using the fabric for something else.. a dusting rag..  etc.   I think what the problem *really* is, is that I do not have a walk in closet.  Clearly.

The kitchen also got hit, and I managed to toss all the ratty old spatulas, and the 5 sets of measuring cup sets.  As well as 800 packets of soy sauce.  Then I thought, what if we go camping, spur of the moment, and make rice.. and I'll have no soy sauce?!  And then I thought that's exactly how I end up with 800 packets of soy sauce, and that if I served it with rice while camping, Mr Snork would refuse to eat it anyway, citing health concerns, FDA guidelines, and average life expectancy of people who scavenge for food at the bottooms of their kitchen drawers.

I did, however, keep the 200 ketchup packets, because parting with two perfectly edible things at once might seriously scar my psyche.

I have also stripped down the living room curtains, and made Mr Snork put up a traverse rod we've had for ages, and am now working on making the sheers into austrian shades, of sort.  I was pretty sure getting the rod hanging was the major obstacle, but it's now been 4 curtain-less days, and an unreasonable sunny/hot living room.  Oops.

I am waiting for the mail ordered sheer austrian tape.   Had I known the sheer type can only be gotten online, Mr Snork might have gotten an extension.   Something tells me it's going to be a disaster.  Horizontal gathers just seem wrong.  I mean, I found some really good pictures online, but my sheers are looking at me with a smug smirk that tells me they will not go down easily.  It's not just their attidude, either.  I used some opaque white tape JoAnn Fabric carries for the edges, and the sheers curved in mutinously.  Something tells me that adding 5-6 more segments is not going to improve the situation.   Good thing I got a load of drapery weights at a yard sale for a nickel.  Fingers crossed.

In addition this, I'm re-making the curtains to add heading tape, pleats, hooks, etc.  This requires piecing panels together, by hand;  so, mostly, I've been staring at a giant pile of curtain.  I have a sore back that's not conducive to hours of hand sewing.  I'm contemplating Stitch-Witchery, or some other iron on adhesive.   Horrifying as it may be, it might be the only way these curtains will go up before Strawberry gets here.

Speaking of whom, I have to paint her room.  Green, with bubbles?  Or flowers?  And, may be a monkey.  Might have to stencil the monkey..   She's also going to need curtains.  I'm waiting for Mr Snork to rip out the carpet and put down flooring in that room.  He's seriously lagging on his nesting syndrome, because I sense no sense of urgency about him whatsoever.  Although, he is remarkably good at humoring me, so there's that.  Had I said today I need that room painted purple, hire an artist to paint a castle, and need him to get into the walls to wire some lights into said castle, I swear, he wouldn't bat an eyelash.  He'd pretend to look up castle painting artists adn their credentials and lay low, waiting for the nightmare to pass.

AND, in a truly exciting development, I think I have tracked down the T-Mobile dress reincarnation.  What do you think: 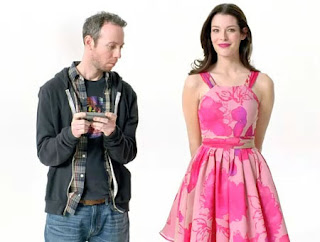 Well, it's close enough.  It's closer than the other 'reincarnation' I procured on Ebay:

Might have to make both.  After the curtains.  And room painting.  And shady sheers.  And a quilt I am making...  (true story).  And, of course, the wedding thank you cards.  (Insert very ashamed smiley face)

And, only, like, 6 weeks to go till Strawberry!  (Who is no longer breech, after 9 days of 4-hour-a-day snorkeling schedule).
Posted by Snork Maiden at 23:24 No comments: