It's Alive, and It Blogs! About Pillow Shams.

I've actually been able to sew up quite a few things lately.  I found out having a toddler on hand does not, in fact mean the end to all hobbies, but it does mean having to break them up into minutes here and there, and the pictures I take 'for the blog', always end up getting lost behind adorable pictures of Mouse sleeping in her carseat, or Mouse standing on her head, or Mouse doing less adorable things that still need capturing.  She's our first, so..

My latest project, despite of the incredible month+ long heat wave we've had, has to do with flannel.  I want winter so badly to come, I am planning my 'winter bedding' while it's 105' outside.  To that end, LAST winter I stalked some Company Store flannel - an adorable birdhouse pattern: 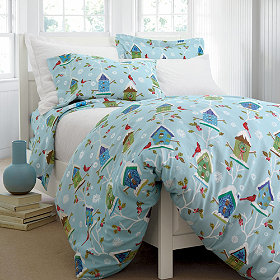 I think it's adorable, anyway.  When it arrived, Mr Snork was sure it was for the nursery.   He's still holding out hope.

I LOVE The Company Store.  They don't send me free stuff or anything, but I have flannel sheets my mom got me years ago, and they're still as new after wash.  Those things went through college, and everything.  They aren't the only ones who carry high quality flannel, but I also lovvvvvve their patterns.  The other day, they came out with penguin flannel. 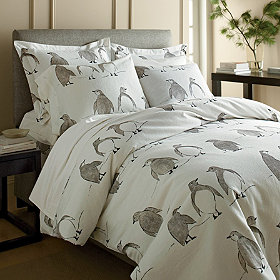 Pretty sure I'm going to have stalk that in the spring..

By the time I got done stalking their flannel into clearance last time, I was only able to get a duvet cover and a fitted sheet, no shams.  BUT, the fitted sheets were on super clearance for $13.99, so I got two.  I figured I can easily make pillow cases, or, since Mouse was tiny and the possibility of sewing seemed like light years away, I could just drape the extra sheet over some pillows, until shame would bring me to finally sew them up.  Ha.

But, babies grow FAST.  And humans get more efficient in taking care of them.  And now I have found time to sew.  Yay!  And even blog about it!!  Double yay!

I don't like pillow cases, they seem really asymetrical and weird with one side all open and hanging out, so I made some shams, with 2.25" flanges all around.  I have a king bed, so I needed king shams.  The standard size of a king pillow is 20 x 36, and after doing some math, I came up with the measurements to cut:

I cut away the elastic on my fitted sheet, and ripped the corner seams to make a flat piece, and gave Mr Snork the job of figuring out efficient placement, so I could save enough fabric to make something else: 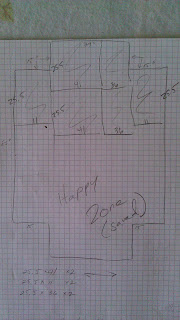 Mr Snork is really good at this sort of thing.  I cut out the pieces, two of each, since I need two shams.

The four back pieces need hems for the envelope closure, so I turned and pressed under a 1/4" raw edge, turned under another 3/4" and top stitched the hem in place, on the right edge of each longer piece, and the left edge  of each shorter piece.  The birdhouse pattern runs one direction (roof - up), so the hem placement was specific.  On a non directional print, you could hem any edge.   I basted e v e r y t h i n g.  It was awful. 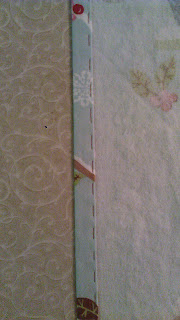 I also basted closed the envelope opening, once I lined up the pieces with the front, to prevent any shifting there. 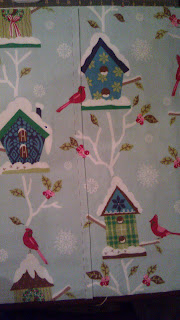 I also screwed around a considerable amount of time, matching up the pattern on the back pieces, then I remembered they'll puff out when filled out, and won't match regardless, so that was an hour wasted.  Nonetheless, I matched the patterns, and overlapped a further inch.  It does look nice in the back, but I'm not sure it was worth the extra effort: 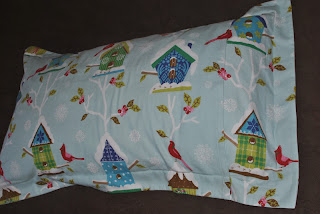 I mean, it's the thing you sleep on, AND it's the back of it.  Overkill much?

I sewed all around, with a 1/2" seam allowance.  I also surged the edges, but that's probably overkill also.  I guess since I anticipate these lasting a lifetime, I'd hate for them to start unraveling from the inside 50-70 years from now.  Ha.  I clipped the corner to within 1/8" of the corner, turned inside out, tried my best to get pointy corners and pressed all around.

For the flanges, once pressed, I basted the opening closed again (had to open it to turn shams inside out),  pinned and basted (again!) 2.25" from edges all around, 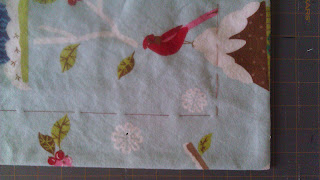 I wish I was just good, and didn't have to baste.  HOURS wasted.

and then stitched all around, creating a 2.25" border.   I measured 2.25" from the needle with a quilting square and stuck a piece of tape on the sewing machine bed, to make sure I stayed at 2.25, even if my basting wasn't perfect.  I backstitched at the envelope edges, since that's where most of the stress is on the fabric when inserting pillows.  If this was a decorative sham, I'd slip some interfacing into the flanges, to keep them straight, but I didn't want to bother this time around.  They're sooo floppy, that I'm tempted to undo the last stitching and stiffen them up.. 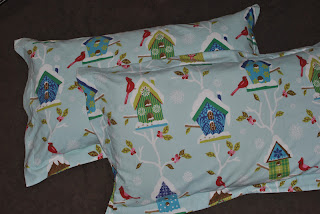 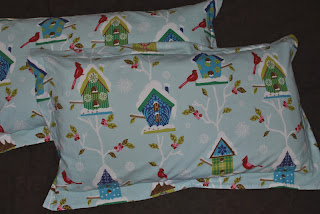 Since, the weather outside does not permit flannel, and Mr Snork flails MOST dramatically at the sight of it, I can't make up the whole bed in birdhouses yet.  But, soon..  HOPEFULLY, soon!!  This took 3 evenings, but it should be noted that I'm a really slow sewer, and I was being extra slow, to make them perfect, as if I'd bought them.   The basting takes most of the time, but a number of traumatic seam ripping incidents make the basting a necessity for me.  20 minutes basting ensures I don't spend an hour picking out seams. 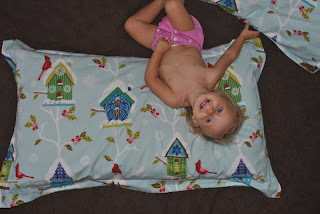 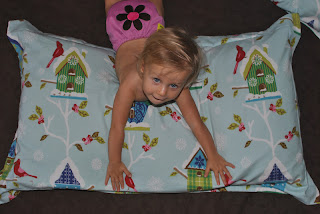 What is it about toddlers - they must be in the very middle of whatever you're doing?  When I was cutting the sheet, she set up play camp on the other end of it.  When I was basting, she was acting crazy about the thread, like a cat.  When it was picture time for the final product, she RACED into the bedroom, like she sensed she had business there.

This was my first such project, but I will definately do this again.  Even if the shams are available, this might be a more cost effective away to get them..   In this case, $13.99 = two king shams, and a possible adorable baby sleep sack/blanket/nightgown, another standard pillowcase, (or two, I haven't measured).   I've also seen some people online doing this with Pottery Barn, and shower curtains - when king shams aren't available, but a shower curtain in the same print is.

The other day, someone on Ebay was selling a matelasse coverlet in the same color and pattern I have, for $37.  I THOUGHT about buying it, and sewing ALL the shams, to complete my set since I'm too cheap to spend $59 per sham.  But by the time I got done thinking, someone else bought it.  UGH.  Totally should have.   I'm heavily side-eyeing you, Ebay purchaser that ruined my home decoration plans.
Posted by Snork Maiden at 20:04 6 comments: