What's in Your Potty?

The potty has spent MONTHS in this house, getting used to the surroundings, and (mistake in retrospect) serving as a backup toybox.  Until very recently it hasn't seen a drop of pee, and wouldn't know what to do with a baby butt if it sat on it.  (Which it often did, but mostly clothed).   I have spent a couple months casually hinting around the potty, suggesting we read books on it, but I didn't make a real impression, I could tell.

Few weeks ago I caught Mouse stashing uneaten breakfast blackberries in the potty for later, and I knew then that I was doing it wrong.  I read a bunch of articles from well meaning pediatricians and mothers.  And then some more articles from more frantic mothers and kinda weird pediatricians, and decided I was a professional.  Every night we'd let Mouse loose diaper free (since both of us are home, easier to catch her in mid-pee) and try to read books on the potty.  It sort of worked.  We read LOTS of books, colored lots of pages, and peed on almost every rug in the house. 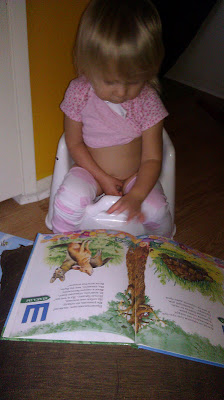 Potty is for Playing..

Mouse has a remarkable ability to stop peeing when interrupted, which makes it impossible to carry her to potty mid-act, to catch even a couple drops into the potty.  So that a celebration dance could be done, of course.  She stops peeing, and then when we've relaxed our watch, finishes up behind a drape somewhere.  Or behind the giant Costco teddy bear.  Or into her little foam armchair.  She's not really picky, except that it can't be in the potty.  This one time, couple weeks ago, we caught her mid poo - and caught it into the potty,  (I have never seen Mr Snork move so fast, and we've played volleyball together) but she was neither super impressed nor convinced that that's a good use of her potty.  Even the Oreo didn't really get her riled up to celebrate.

She can also hold pee for a really long time.  Like, super long - because, I mean, she's the size of a watermelon herself - so when I feed her half of one, I expect pee galore in minutes.  Especially when I follow it up with water, juice, and grapes.  Not 3 hours later.  That's crazy bladder muscles, and I'm not even sure that it's good for her.  On the upside, when she REALLY has to go - it's REALLY obvious.  So I guess, there was that.

Yesterday, she peed on my leg.  I mean, it was REALLY obvious that she had to pee, to anyone who knows these things, but I thought she was rubbing her butt on me because it was itchy.  I tried to lift her to potty mid pee, but she screamed and looked like was done anyway.   After that, and (like the articles instruct) some mildly expressed mild disappointment from me and new pajama pants, we snuggled up on the couch, and she peed ALL OVER me.  Within minutes of the leg pee.   That's when I really knew I was doing it wrong.

I checked with a Russian forum - they don't say how, and they don't even have a term for "potty training", but all these Russian kids are running around using toilets as soon as they can walk.  (So, my mother isn't lying).   Yesterday night, we did the the usual potty dance.  Read the books, drank some water, pranced around.  Then, when I thought it was pretty close to rug scrubbing time, I took our potty and books, and went to the master bathroom.  It felt like hours, and a little bit like prison, but the beauty of the bathroom is that there are no drapes, no teddy bears, very few toys (she found some behind the hamper), and really, the potty is the only place to sit.  I read the animals alphabet book 6 times, from cover to cover.  The Russian alphabet has 32 letters, so that's 32 poems, plus pointing out all the pictures, and making animal sounds when appropriate.  Periodically, we checked for pee.  And then, just when I was resigning, she got off the potty, and waved at it, nonchalantly.  And there, was PEE!!!!!!!!

I have a picture of that, too, but I have since realized that it's probably not the case where a picture is worth a 1000 words..

Not an entire glass of juice and 3 slices of watermelon worth of pee, or anything.  That she was saving for the night time Pampers.  No matter.  I did a dance.  Mr Snork arrived home just in time to join in the dance. I gave her a magical cookie.  (Seriously, it's these Polish soft wafer things, covered in chocolate, with fruit jelly inside.  I don't really share them with anyone).  After she went to bed, I had a Starbucks to celebrate.

This morning felt like starting over, and just when I was thinking about (and dreading) another hour closed up in the bathroom, I checked for pee, and mentioned that cookie.  And turned on Wall-E, alternating it with the    Animal Jail show, where some dumb chick locked her dogs in a 103'F vehicle.  But plot isn't important, Mouse LOVES dogs, and there was plenty of dog action, and between that, Wall-E, and the mention of the cookie, she peed again.  Just a little.  I mentioned the cookie again, and she peed a lot.  The watermelon may have finally cycled out. 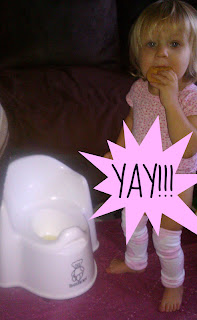 She's just in it for the cookies, but I don't care.

She peed again in the afternoon, when my girlfriend showed up to visit.  In between she peed on herself when we went outside, but I think that's a form of protest against the training pants. 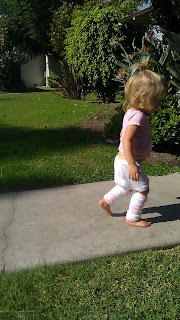 They were the smallest (2T) and the prettiest (white) that Babies R Us had.

I would probably pee on them, too.  Not to worry though, now that I know that this peeing thing isn't a myth, I've attacked Amazon for some adorable 18 month old pink training pants.  Look out, neighborhood.  Mr Snork is going to be appalled when the charges come through, but pre-pee yesterday, I was wondering if we had the most defective, ineffective, and repulsive potty out there (why else would you consistently pee on my doormat instead?) and was pretty sure I needed to start trying every brand out there, until one worked.  Training panties might be cheaper.

Posted by Snork Maiden at 22:54 No comments:

Mouse was doing a duo act for Halloween with (very reluctant on his side) her Papa.  It was supposed to be a trio, but I ran out of time to make my Queen of Hearts costume.  May be next year.

Mr Snork's Hatter costume came together over the last couple months or so frequenting the Boutique (women's capris, blazer and shirt to modify, sparkly bow tie, MY socks), but I could never find anything suitable for Mouse.  I don't trust internet costumes, and she's so small, (20-ish lbs) that there's a very limited range of things she can be that aren't footed, fluffy, and have a headed hood that she HATES.  So I couldn't find her an Alice in Wonderland costume ready to go.

I looked in stores and on EBay for a suitable blue dress, but struck out there as well.  Queue McCalls 6268 and an old blue button down of Mr Snorks.  I've kept that pattern on top of my 'want to make' list, just because it's cute, but if you use the poofy sleeves from view D, it becomes a perfect Alice dress: 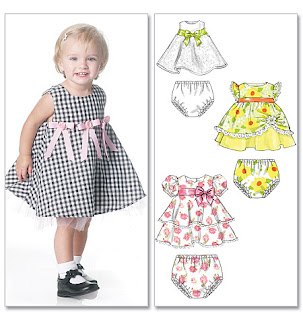 A size large fit my 29 pound, 31" tall Mouse.  An old large size shirt of Mr Snork's provided just enough fabric for the dress, when seam ripped (not cut, I used the seam allowances on several occasions) and I had to piece the back skirt from two pieces.  I could have just bought some blue fabric, but then I'd never use up my giant pile of "repurpose" stuff.  One shirt down, 234058274 to go..

Just a tiny pile of scraps left over: 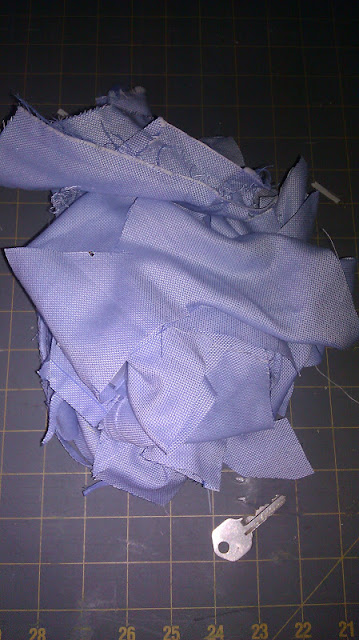 I was happy to see that Janie and Jack currently carries a (beautiful) dress, that looks just like this pattern, minus the sleeves.  So, we're even in current fashion. 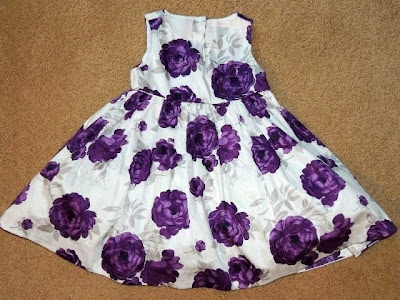 It came together really easily, except I apparently suck at making plackets.  The whole make a slit, and then make that slit a straight piece of fabric didn't work out for me, it's puckered in the back..  I will practice it to get it right, because I really like the finished look.  Alice's pinafore ties covered the back, luckily: 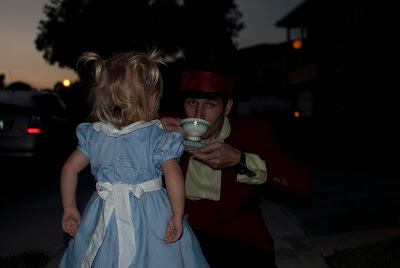 I cut the skirt on bias, just because I really like bias cut skirts.  I love how full the skirt is on the pattern, many times the envelope picture looks awesome, and then you cut what is essentially a wimpy A-line.   I'm pretty sure I want to make a holiday dress from this pattern, as well. 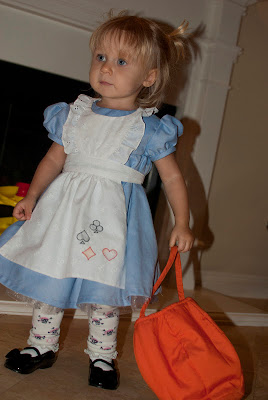 Dress from the side: 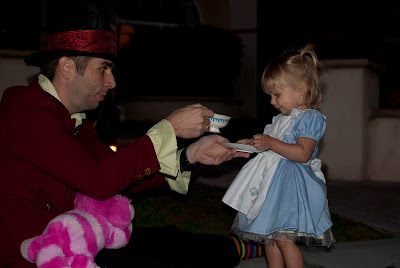 Alice isn't complete without a white pinafore, and although I'm sure somewhere in my pattern pile there's a perfect vintage pinafore, I couldn't find it, so I made one up. 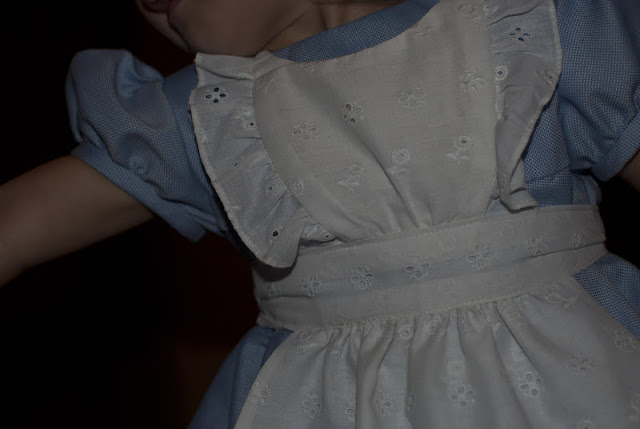 I drew in some card symbols with pencil at first, and they looked fine, but then I had time to waste, so I went over them with some running stitch. 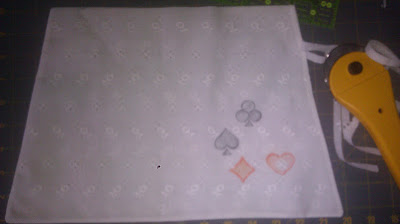 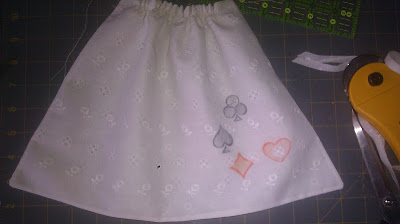 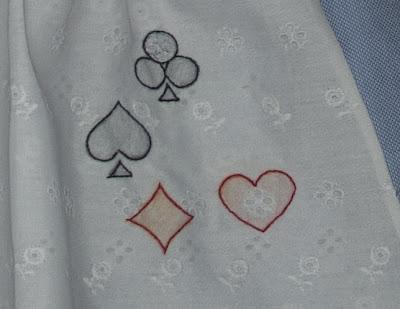 Alice was adorable.  She didn't really get trick or treating, and was trying to sneak into people's house's, past their legs and bags of candy, but she did help her dad win the office costume contest.  She makes for an awesome prop.  Or, rather, he makes an awesome prop for her.  The cat helped. 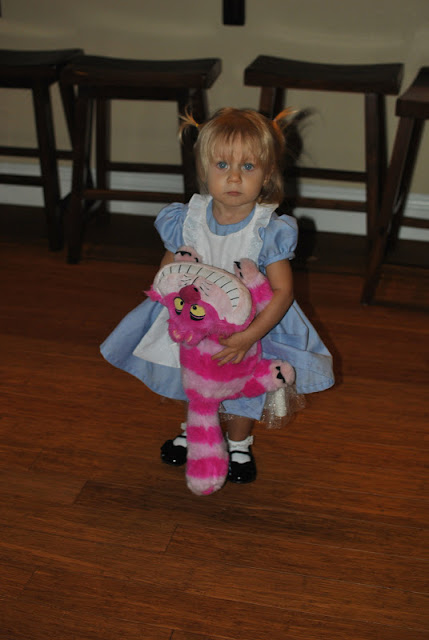 I used Mr Snork's old shirt, and some white eyelet fabric I had picked up at a yard sale, the lining came from Costco's Kirkland 600 thread count bed sheet that I found in the boutique.  I usually draw a line at bed linens from thrift stores, but I figured if I cooked in in industrial laundromat long enough, it would make a delightful Queen of Hearts dress.  I never made it that far, but it does make really nice lining.   I think I might talk Mr Snork into buying us a King set from Costco.   I also used some JoAnn's tulle for the ruffle, from the massive tulle sale they had, where I bought all of it, in all the colours.  Whew.  One yard used, 9874560348756 to go.

Alice and the Hatter: 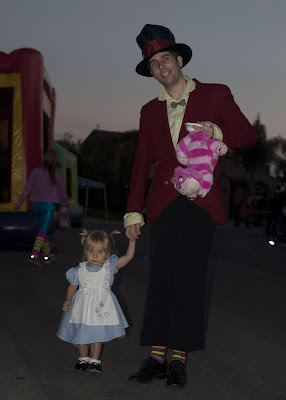 I think this might be our thing.  Every year. 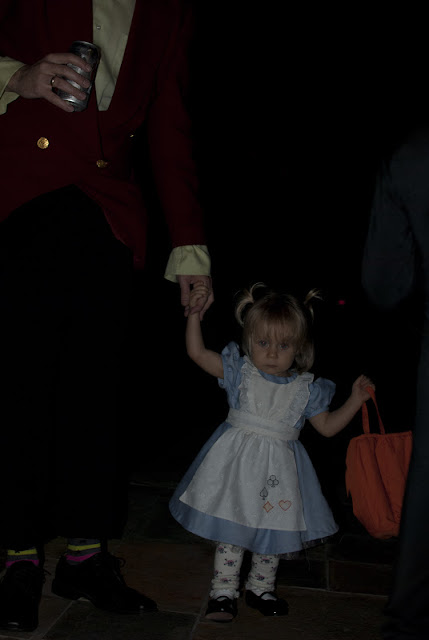 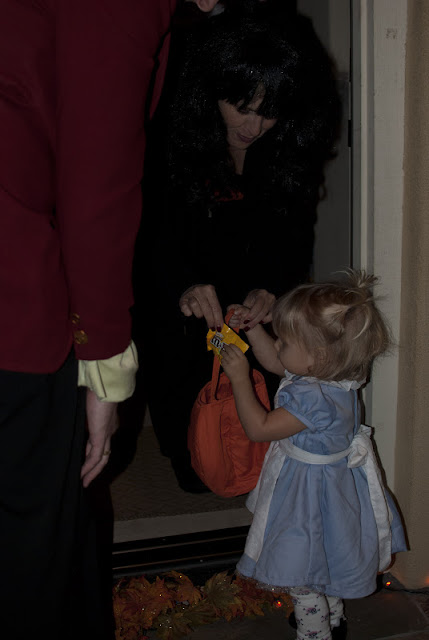 Posted by Snork Maiden at 21:32 No comments: