A DIY Doughnut Pillow for the Pregodactyl.

I had all those trash bags of couch stuffing I rescued from the dysfunctional couch cushions, to trip over in the bedroom, where I hid them from the rest of the world.  Because I knew I would find a use for them.  Meanwhile, disposable space in my bedroom = about 5 trashbags of couch fluff.  I had 4 bags.  1 trash bag worth of square footage in a bedroom is not pretty.  They'd been in there for a month, and Mr Snork started acting positively homicidal towards them, so I finally got creative and made a U shaped pillow, for all my pregodactyl woes.

I have the actual Snoogle or whatever pillow someone kindly donated to me, and it's nice, but I don't like that it also goes under your head.  I like my feather pillows under my head.  So, I wanted something similar, and may be a little firmer, to prevent me from rolling on my back.  (For some creepy reason that I'm sure is explained somewhere in "What To Expect While You're Growing A WHOLE Other Person Inside YOU", if I end up on my back during the night, I wake up with numb extremities.  This makes me think Strawberry isn't getting enough blood either, and then I freak out, and stay up for an hour googling things like "decreased placenta bloodflow" and "blood deprived fetus".)

I found some nice almost denim-like fabric in my stash, and drew what I thought would be an acceptable pillow on fold: 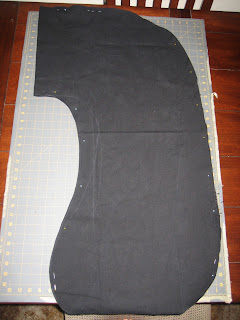 The shape turned out OK.  I wanted more of a straight U shape, but I think I ended up free-handing with the rotary cutter too much.  It works out, because the resulting shape can be curled into a doughnut of sorts, which is useful.
It was too wide, at first, so I stitched the center taking in 2": 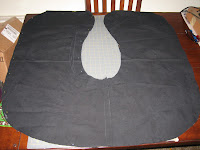 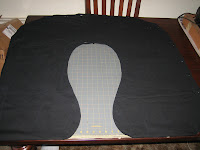 I FINALLY had a use for one of the 80 million zippers I picked up at some garage sale for a dollar.  Zipper, inserted, two trash bags of couch fluff later: 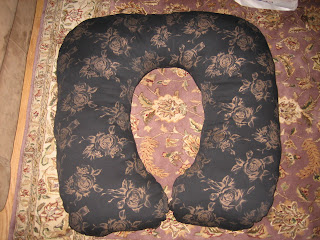 I can arrange it into a doughnut and lay on my belly, having it hang into the doughnut 'hole'.  It's been pleasing for my back, which is currently jacked up.  I was really picturing myself to be the pregnant chick that runs all the way into the 9th month, but apparently, I'll be the pregnant chick that swims every once in a while mostly sitting on her ass, sewing things, drinking tea and crumpets, and laying around wrapped up like a cat in a pillow doughnut.  (Some pelvic joint thing I'm hoping is a fluke and will resolve any.day.now.)

Next up, a reading wedge pillow, and I should be couch- fluff- trash- bag- free! 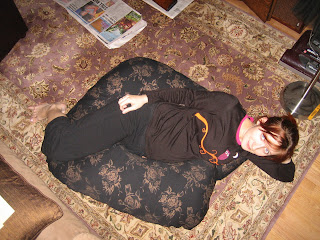 I don't always use it to hang out on living room floor.. but I guess I could?

The 99c sale came and went, so I stocked up some more, despite Mr Snork's objections.  Cause, for 99c, I think I should actually get 2 of each pattern.. just in case. 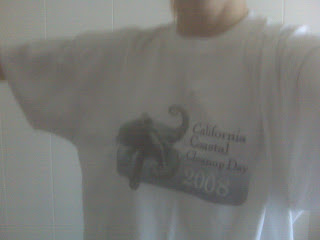 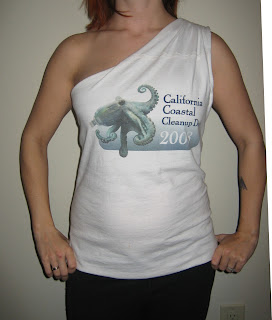 I know, you're thinking, 'doesn't she know she looks fat in that?'  But that's only because I'm slightly pregnant.  The 'special diet' I mentioned couple months ago referred to the complete lack of interest in food (and most other things, except naps).

Here it is on Nora, looking pretty spectacular: 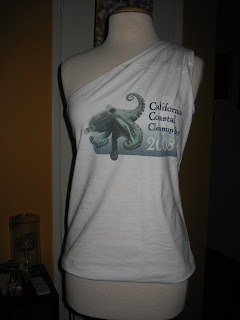 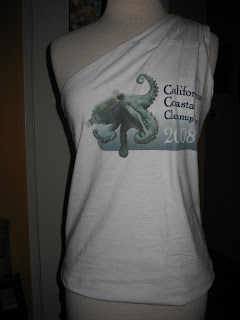 I really should have made this top that one week when my boobs grew all of a sudden, and for once, were bigger than my belly in profile.  But, other than the timing it turned out cute.  I didn't need the elastic, because of Tshirt used, - I cut size 12, which seems to work out for 34 bust and formerly 28 waist.   I would definately cut a larger size if I wasn't using stretchy fabric though.  I used one of the sleeves, cut off, to extend the top front view, to be able to include the Octopus (Yay, California Coast Clean Up Day!), and the back worked out just fine, cut off center: 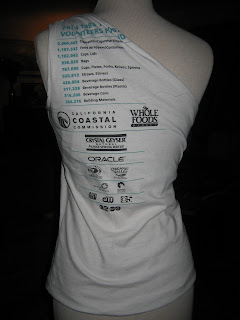 I like that its length, I hate, HATE short shirts that ride up.  Overall, it's a neat way to recycle old shirts, the only catch being, they should generally be couple sizes too big.  Although I had a whole other sleeve to work with, it makes for a lot of extra seams.  The facing had to be made from another tshirt entirely, from Mr Snork's TShirts For Rags Pile, and I cut it using the gathered front and back as templates, to avoid gathering it and having a bulky shoulder seam (for a TShirt, anyway, might be fine in other fabrics)

For what its worth, it's not a terrible maternity shirt, when I stop sucking my stomach in for modeling pictures, even if the octopus gets lost a bit. 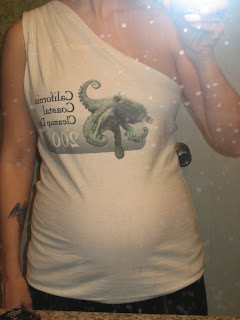 Next up either more quilting (I'm a quilter now, a really, really bad one), or Simplicity 2587, to see if I can make use of my new boobs, while mutilating the pattern waist size to make room for Strawberry.

Mr Snork has also requested a gun cleaning mat and a rifle sack, out of some manly camo fabric I have laying around left over from the manly yoga bag, but he's yet to present me with his full concept.  I found that the big four are lacking in their gun/ammo pattern selection, so he's gotta be pretty specific.
Posted by Snork Maiden at 10:36 1 comment: