3 miles of treadmill on the screen 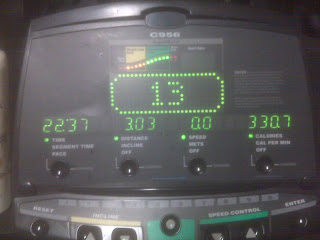 Well, if we were to do 6 miles like we planned, in prepapration for the Turkey Trot 10k. (Warrior Dash has made me ambitious and delusional at once.). Its a nifty combo.

Instead, I messed with tension on Blue Elephant, ate half a loaf of bread, invented excuses, announced I was sleepy,..

And by the time Mr Snork delivered us to the gym at 10:30 pm it was a miracle I didn't stumble off at 2 mile mark, saying unladylike things.

Then I remembered the half a loaf of bread. Dammit.
Sent via BlackBerry from T-Mobile

Posted by Snork Maiden at 23:23 No comments: 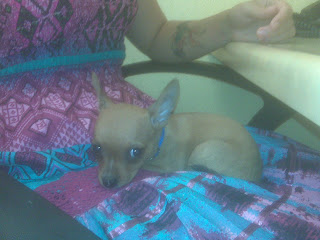 I get to borrow Henry from one of our customers a few times a week. He naps in my lap while I ignore everything work related.

It's a pretty good system. Sometimes we read emails and take walks around waiting room together. And pose for pictures a lot.

After he leaves I have to remind myself for the millionth time that
I spend about 1 weekend a month at home,
some airlines now charge full tickets for puppies,
puppies do not like being stuck in my two bedroom apartment full of sewing machines 9-6, every day
Small puppies like Henry might object being left at camp as bear bait

It is noteworthy that, unlike Southern Californians who like to start at 6 am and other disturbing hours, non of these started befroe 8, and there were only a couple of those.  Mr Snork and I (OK, I) were overly zealous with our 7 am start.  So, we had breakfast, and he gave me a quick pep talk about how we don't need a n y thing.   Hours of fun ensued, all within a few mile radius and an ocean background. 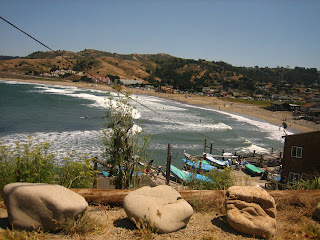 There was even an episode involving llamas.    LLAMAS.  (they weren't for sale) 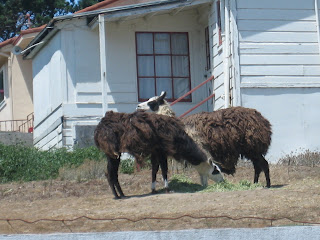 It was the home stretch, Mr Snork could see our house (well, my dad’s), and smell the chicken sandwich and a nap.. But there were two more garage sales on the block between him and the house. The first had a camp stove that we considered, but then decided we didn’t want to pay $10 for, because we might actually want a fancier one, with dual fuel options and a middle burner. This is important, we cook a lot while camping.


The last one had a sewing machine, but a plastic one, so I wasn’t interested, a giant old paper cutter that briefly intrigued me until I drew a mental parallel between it and old French guillotines. It even had a wooden platform. I decided to hold out till a newer one, with a sliding blade falls into my lap.

And, The Quilt. I picked it up, and the stern grandmotherly lady was quick to say it’s got a hole in it, her dog got to it. This was true, there was a hole. But there was also some pretty rose shaped top stitching. And it was pink. She couldn't remember if her mom or grandmother made it, then settled on an aunt called Barbara Jean.  I looked around some more, getting the most out of my last sale of the day, found nothing, and came back to the quilt. Jesse wimpered something about ending his life if he didn’t get a sandwich right then. 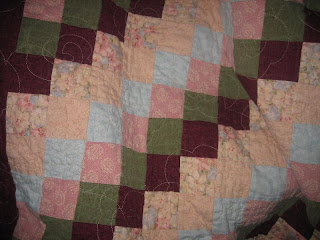 I asked the lady what she wanted for the quilt, and in the background, I heard the sound of Jesse melting down.  She said, “The one with the big HOLE in it”? as if she didn't have it there for sale, and I was shopping her purse for her personal effects.  Since she had no other quilts, torn or otherwise, I said yes, and traced one of the stitched roses with my finger. (Jesse maintains that she didn’t have it out there for sale at all, it was accidentally brought out with the laundry and if she did, it was c l e a r l y meant to line a dog kennel. Which only made it worse, because, c l e a r l y, the quilt needed to be saved.) 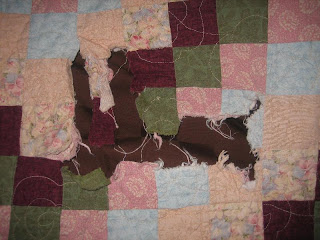 “You want to FIX it!”, the lady said with the inflection one might say, “You’re want to PEE on it!”. And, “you are a sewer” that sounded a lot like, “You smell like eggs”.  Followed by some muttering about me petting the quilt lovingly.  She also said I could have it for a buck – coincidentally, the exact amount, to the last quarter, left in Mr Snork’s pockets, who, by the way, behaved atrociously, suggested I inspect the quilt for dog poop, and asked the lady if she was also selling rope. (The quilt didn’t smell funny. It was freshly washed, and smelled like lavender Tide. My favorite.)
And, anyway, it proved my point that she WAS selling it. If she wasn’t, I’d gotten it for free. Even though I’m not really a sewer, I just like to pretend - after careful examination, its been determined only 4 squares can’t be salvaged, and will have to be replaced – I can swing that. 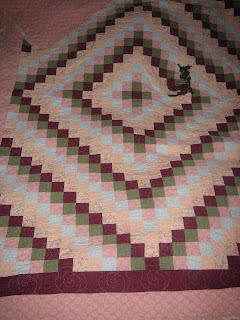 In Mr Snork’s defense, I had, just earlier gotten a quilt, with no holes, and a matching pillow sham, for $2. But we won’t talk about that.  I also have a bit of an obession with "saving" things from their current environment, particularly, if they are under $3.  And, a slight disconnect between the number of projects I take on and the amount of time I dedicate to them.  But, look at the stitching! - 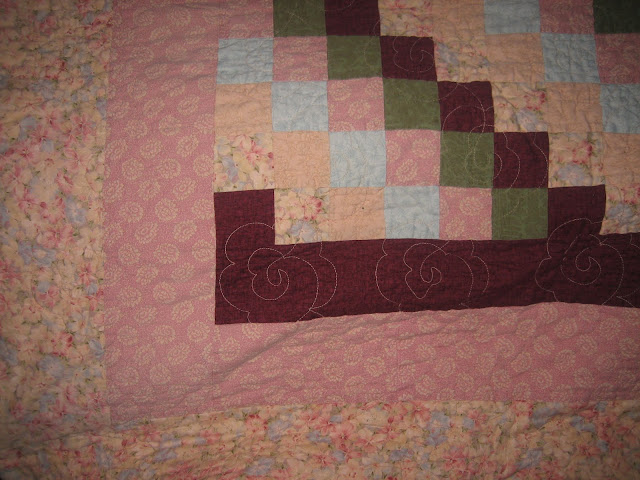 I mean, what do dogs know about pretty rose stitching?