I may have mentioned is it a gray, cold, stormy Southern California week. Three days this week there have been thunder storms. Do you ever worry that lightning will hit you through the window? If you don't, don't worry, I worry for you. 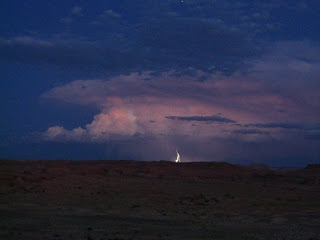 I remember when I was may be 9, in a village in Ukraine, my grandmother was burning the fire stove, and a thunderstorm came. My grandmother took me and my great grand mother across the yard to the underground cellar each house has next to it, in lieu of a fridge. We stood there, in the dark, next to sacks of potatoes, pickled tomatoes, and fruit jellies for a good half hour, waiting out the storm. I wondered at the time why a lightning would pick ours, the smallest of all village houses, to strike, but my grandmother was determined to wait it out, since "lightning looks for heat". We giggled whilw we were in there. I think my great grandmother may have sworn out loud. It was pitch dark. But it never occurred to my grandmother to take a chance and go back tot eh warm house. So, I guess, it's genetic.

It crept up on me with age, and fear of heights, and I wonder if it has to do with being OCD, but I am action packed with paranoia. There's lightning outside right now, and I am pretty sure it's out to get me. I researched online and found out I am safe in my vehicle in a storm. But not in my tent. Check out the National Weather Service Lightning Safety Site. The dude who got killed in his tent?? "A bolt struck a boulder next to the the tent, travelled through the ground, into the tent, and into the guy's elbow" ?! I am scarred for life just having read that. It travelled through the ground, and INTO the tent. How sneaky and underhanded is that? I think lightning, and I think avoid standing in a puddle, touching the tent poles and my thermos. I never think, 'float in the air'. I will now, though. I'm all over it.

Or, same site, check out these cows:

A little more straightforward, they were feeding through the fence when the lightning came. But still.

It also JUMPS. Take note, it travels underground, and JUMPS. This is why they tell you not to stand next to large objects that might attract the current. What they don't tell you is stuff like it can travel horizontally for 5-10 miles. Next time you're out about in a storm, try and make sure you're not next to anything for about 5-10 miles. Oh, except, I guess, if you succeed, you ARE the large object.

I am learning to make sure that when a storm hits I'm in a non convertible vehicle of some sort. Everything points to these being pretty safe. As long as you're not listening to the radio. There's always a catch. Like, the fact that it travels under ground. Or through plumbing. Or jumps.

I got woken up by the thunder noise, and I couldn't go back to sleep. (that's what I get for skipping gym and napping). Jesse isn't troubled at all, and I hesitate to share with him that I have calculated approximately 65 lightning paths that all lead to me. Most of them have to do with the bedroom window, and a couple with my mug of tea. It JUMPS, people!

Last time we camped in Moab, UT, there was a giant lightning storm dancing on the rock rides all around us. I was fascinated, and took a million pictures to catch just a few flashes.

My absolutely favorite camping picture EVER: 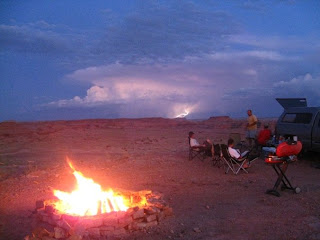 If you zoom in on the lightning, it even looks like a little man falling down. I think it was speaking to me. Talk about omens.

I also asked Jesse if I would be safe if, say, I curled up on top of the truck tire. As in the wheel. I spent a good 10 minutes mentally arranging myself on top of a truck wheel, in a fashion that would have all my body parts off the ground and under th truck, simultaneously. Talk about survival instinct kicking in. I decided there was about 50 lbs too much of me to effectively carry it out. Or we need much bigger tires.

Back then, cell phones weren't working, and I didn't know about this truck safety thing, it seemed like a giant steel electrocuter box, and I was safer planted on some nice, non conductive rocks; I even stayed away from the grill you see there in the picture. We were even camped out on the National Weather Safety No-no: a hill ridge. To be fair, the storm seemed to be pretty far off, and cell phones had no reception to read about how it travels horizontally for up to 10 miles. Next time I am camping though, and a storm hits, you best believe I will be holed up in the truck, folding up myself as compact as possible and thinking very small thoughts. I am not trying to hang out somewhere and wait till I feel my hair stand up (St Elmo's Fire, old sailors call it)

On the bright side, this has taken my mnd off the constant worrying that an earthquake is looming (Southern California, we're long overdue, says the History Channel). If ever I DO get lightning struck, the headlines will never say, "Unsuspecting SoCal Woman Taken Out by Freak Lightning Strike". Insead, I hope they have the good sense for something like, "A Very Suspicious Woman Taken Out By Lightning She Fully Expected As It Struck Through the Window, Travelled Alarm Clock Wire, and Jumped Out Her Tea Mug At Her".
Posted by Snork Maiden at 22:21