I cook at home, mostly. We go out for sushi and stuff, but I enjoy cooking. I grew up in Ukraine where going "out" for dinner was unheard of. When I visited a few years back, it was still uncommon to go out with the expectation of eating out. People pack sandwiches if they plan to be out a little while.

I remember when my grandmother brought bags of sandwiches for me and my cousins to a Nut Cracker ballet. It may have been Swan Lake. I only remember giggling over the tights the boys on stage wore, their fluttering legs, and how appalled my father was at the bag of sandwiches.

So, I like to cook, any day I can, our dinners. This weekend I made gorgonzola chesse burgers and livers and Jesse did the bread.

I love gorgonzola anything. I would probably drink in a milkshake form, if such things were available. Jesse doesn't share this passion, but he tolerates it and allows it in his fridge. I blend onions, garlic, and sour cream into a paste that I fold into the ground beef. It makes the burgers soft and tender and spares me from cry-cutting the onions. This time I blended some carrots into the meat. They are indiscernible in the end result, but I felt good about sneaking vegetables in, regardless.

My friend Heather just gave me the most amazing blender/food processor CuisineArt thing. I am a little in love with it, and what it does to my onions (and carrots, in this case, or beets, but that's another post). I crumble Gorgonzola cheese and fold that in the meat. We like pineapples on our burgers, so we get canned pineapples. I cook the burgers on my awesome cast iron griddle that has become a fixed..fixture on my stove. It's magical-ness can not be described and will need a post of its own, along with Heather's blender. 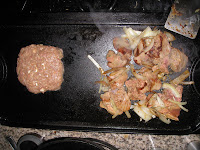 On the OTHER end of the griddle, far away enough to not 'contaminate' (he'd melt down)Jesse's burger I fried up a bunch of chicken livers with onions in some olive oil. Jesse just about fainted when I put a container of chicken livers in the shopping cart. But I think they're exquisite. And cheap. They probably sell them as puppy feed here.

We both had a side of rosemary baked potatoes - I baked mine, all sliced pretty like. I forget what it's called. H-something Potatoes. I saw it on Moderate Means' blog and had to try. 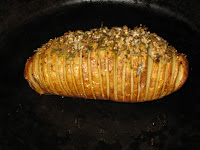 Jesse doesn't really like abrupt, unexplained and unsubstantiated changes in his menu. So he got the regular stove top version. I cube them, sear them, salt, pepper, use steak seasoning if I got it, and sprinkle lots of finely chopped fresh rosemary over the potatoes. Then I cover them and they either finish on the stove, or in the oven. I use giant cast iron pans, so they are good for stove top or oven, and I make enough to have leftovers for breakfast. Then I use the left over rosemary to brew tea for my hair, apparently. 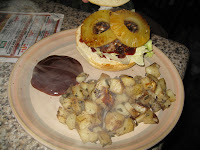 Jesse loves bread, and he got me hooked on Trader Joe's Artisan Rustic Italian loaves. They are completely ridiculous, and practically climb in your mouth unassisted. And my ass compensates.. But, anyway. To make it infinately worse, he finely chops garlic, (Small quantities are key here, or you end up sweating garlic for a weeks straight. True story) drips in balsamic vinegar, pours in olive oil (pours for me, drips for him), and we dip the bread. Sometimes, I blend some tomatoes and into this mix. It makes a dip, kinda like hummus, but heaps ligter. About 7 seconds the loaf is gone and you're wondering exactly how many elliptimiles a half a loaf of white bread entails. Like, 20, probably. Many more than I will take upn myself, I'm sure.

Can you tell Jesse likes his things in certain order? 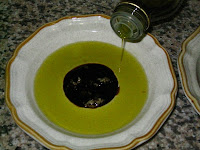