Chandeliers and Trickery and How I'm Always Right

So, while I was milling about the courtyard #3 of the Giant Rummage Sale, waiting for Jesse to come join me in rummaging, I spotted the dusty mini chandelier.

The guy in charge of courtyard #3 kept offering to 'work with me on prices', and I was simply curious if I could get the dusty chandelier for $5, as opposed to $10. Knowing full well Jesse has an aversion to chandeliers, even the free ones.  Turned out I could have it for $5 so I quickly handed him the money, and when the the future Mr SnorkMaiden f i n a l l y got there, I asked him non chalantly what he thought of that cute little chandelier, over there, on the table (in the 'sold' goods section, but he's not very observant like that).

That's when I, the guy in charge of courtyard #3 and innocent shoppers nearby got an earful.  About how:

- Nobody needs a chandelier
- I certainly don't need a chandelier
- I certainly don't need another chandelier (The first one doesn't count btw, my stepmom gave it to us)
- Am I trying to live on the set of Sanford and Son?
- Am I serious?
- A demand to hear a list of three things that can be taken OUT of the house before this one can be brought in (not even fair, I mean, the lamp takes up one square foot..)
- Where in the world would I hang it.
- And, finally, about how he's about to have to staple furniture to the ceiling to have any kind of walking space (dirty lies) so, there won't be any room for chandeliers anyway (wild exaggerations).

At this point I figured everyone has had enough laughs, so I picked up my chandelier indignantly, informed him it was already paid for, and that he'd have to finish his meltdown at home, thanks.  (To his credit, he resigned quietly, and offered to take it to the truck, probably hoping to 'accidentally' drop it a few times en route)

I washed it, and took it apart, and gave the crystals a Dawn bath.  I started to spray paint it green (bad idea) so, I finished it in black.  White/ivory might have also been cool, but I had green and black on hand, so black it was.  It came out exquisite.  It's missing a few crystals, but in all the sparkle-ness, you can't really tell. 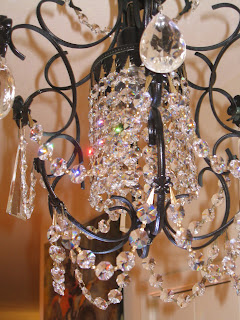 I could not find a setting on my camera that would take a picture of it, the way the Swarovski Chandelier Place down the street has them in their brochures, sigh.  But it's pretty magical.  Jesse apparently worked through his grief while he was wiring it, and while I was off drinking margaritas with Giraffy, he hung it up for me in our hallway.  Yeep!  On top of that, when I got home he conceded that it wasn't the worst $5 purchase I'd ever made.  Ha!

Would you like to follow me through the 80 million chandelier pictures, that depict 1/10th of its sparkle-ness?   Of course, you do.  Meet my hallway: 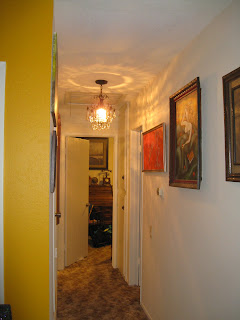 And a close up? 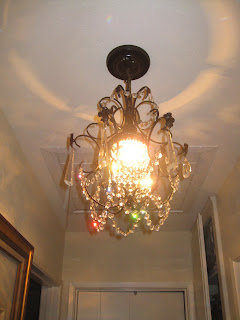 And a different light setting, in case you haven't really fallen over just yet: (Note the sparkly-ness) 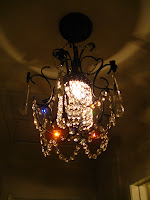 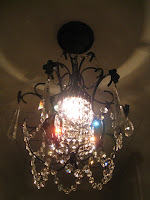 It's even pretty when it's not lit up: 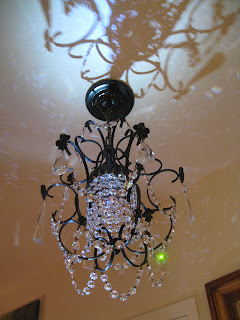 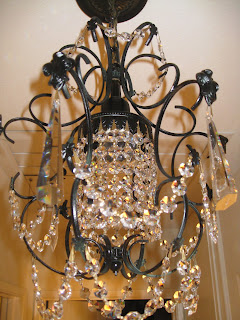 I have a 4g memory card full of these, if anybody needs a myriad chandelier pictures, btw.  I'm also on the market for a cooler camera that can capture sparkling better.  Don't tell Jesse.
Posted by Snork Maiden at 16:01