I happen to own one, but before this last weekends Big Bear trip, I learned I gained about 4" too much for it to zip up fully.   Also, Heather was looking for snowpants for her 3 children, so it inspired me to channel my aimless wanderings into something season specific.  We have since picked up snowpants for her 9 year old, but the snowpant check has become a part of the process.

I don't ski, I snowboard (or sled), and I do own respectable fancy snowboard pants.  I prefer, however, my irridescent Spyder bibs from 80's.  But, I could almost see myself graduate to this: 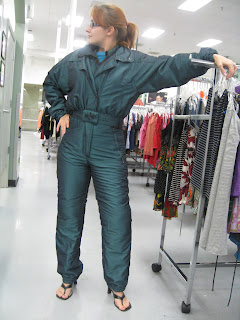 Courtesy of Goodwill, of course.  It also seems to be one sandwich away from a 4" zip up disaster.  But I love the idea of NOT having snow in your buttcrack, all fashion considerations aside.
But there are embroidered designs - on the belt AND back. It's like the wedding dress of snow suits. Jesse seems to be under the impression they are from 80's. But, lately, he's been saying that about everything I find adorable (Umm, the Awesome Beady Dress?!)
For example: 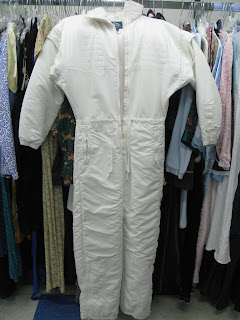 I would even blend in with the snow!  When it turned out to be too large for me, I suggested HE wear it.  He pretended he didn't hear me.  Men.  I mean, even if it IS unfashionable, it's only a short lift ride of embarassment (for the other person).  I'd be pretty OK wearing this around town. 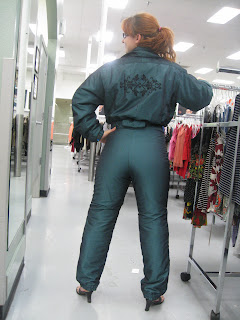 It's a little too tight, isn't it. Pity. This seems to be a recurring theme.  Have all the world's clothes shrunk recently?
Also seen (Santa Ana Goodwill) was a whole snowboard set up, bag, Lamar board, gloves, K2 step in bindings + boots for $49, but the boots were too big.  I think I might just spoil myself at some point with brand new snow stuff. Can't ALL things be dumpstered, especially when you're partial to glittery, flowery, leafy Gnu boards. Sigh.

Email ThisBlogThis!Share to TwitterShare to FacebookShare to Pinterest
Labels: dumpstering