I’ve mentioned how I want a dress form. But I want a cool dress form, with a pretty iron or wood leg, (carved gargoyle feet and a faceted crystal ball on top optional) because it’ll probably end up hanging out a lot in my living room, and I don’t want a plastic contraption with spidery feet, screws, and dials.

Awesome dress forms I can see myself having: 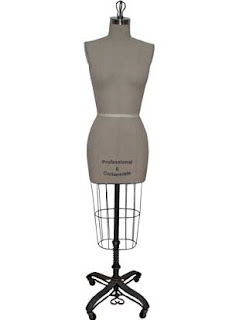 I feel like they would really balance out the look of my appalling sewing adventures.
Nobody in their right mind would have me sew anything for them, so dials are useless anyway, as long as it’s my size. So, I am looking for a 34 bust (sigh), 29 waist, 40 hips dress form. I can pad the boobs and the butt, so I’m not obsessively picky. If it’s got gargoyle feet and 44 hips, I will drag it home, bust out a bread knife and trim stuff like it’s my job.

There was one in a Rags to Riches thrift shop in Newport Beach, but by the time I went home, thought about it, and came back a week later it was gone. “Sleeping on it” FAIL. This led me to stalk Craigslist and campaign that all my Facebook friends everywhere do the same, but meanwhile, I am still form-less, so I thought I’d make a duct tape dress form.

The good – it’s cheap and if you get it right, it's your body copied, 34" chest and 41" hips and everything, so when a pattern looks funny on your dress form, you know you gotta worry.

The bad – you gotta expect to hang out wrapped in trash bags and duct tape for at least an hour, probably more, with restricted mobility

The ugly – being wrapped up in trash bags and tape apparently brings out some truly undesirable traits of my personality.

Jesse kindly volunteered to be the wrap-er.

I heard about using long TShirt but I couldn’t find one I disliked enough to trash, and then I read feeback about it adding bulk, so I wore a trash bag (thoughtfully cut out head hole and arm holes) and since that was too short and I wanted my butt wrapped, I wore a contrasting trash bag skirt.
Early Halloween: 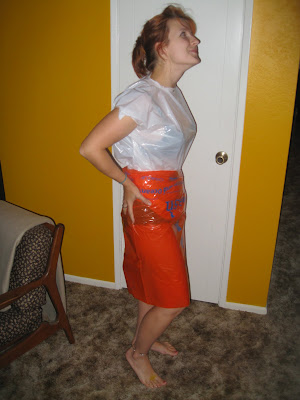 Jesse started at the hips, which in retrospect was a mistake, and if I was creative enough, could be blamed on him. Had I spent SOME of the time being able to sit, pee, and walk about, it would have probably been easier.
The beginning of the disaster: 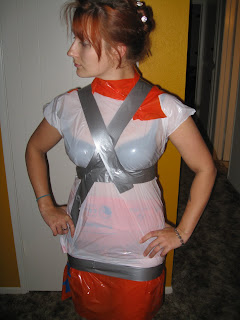 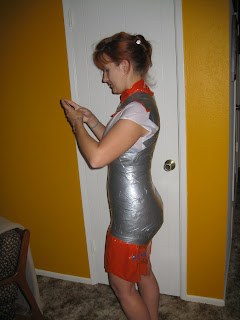 May be had I spent less time texting, I'd have noticed the impending tragedy.
The suggested amount is three layers of tape. Boobs, are apparently to be done in a star pattern first, then layered over crosswise by short thing strips, and the whole body done in horizontal strips, than a layer in vertical, and then horizontal again. 3 layers all over.
It gets HOT in there.
About an hour into maintaining a perfect posture, sucking in the gut, and mentally lifting my butt, I crab hopped to the mirror to find out that either Jesse messed up or my boobs are 2” apart height wise. At first Jesse swore his taping was perfect, but quickly saw his mistake and retracted all. Morning emergency boob corrective surgery averted, but I still check them out in the mirror every once in a while. Way to accidentally happen upon a complex..

I spent another half hour instructing Jesse to wrap me tighter around the waist and hips, looser around the boobs, higher around the butt.. you name it. Shortly after this, I found I didn’t care if 3 layers had been done, I wanted out of that thing. A sweaty garbage bag doesn’t do good things for my psyche. It was ugly. 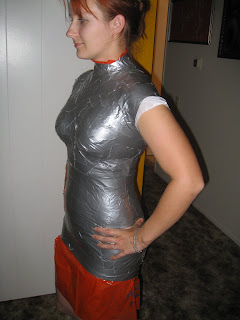 Jesse performed a semi emergency surgery all along the back of the duct tape, and the underwear. I wore a pair I didn’t like preemptively, so he didn’t get in trouble, and I thought the fact that he didn’t gouge my back too much was very sweet.
Taping the scarecrow back up: 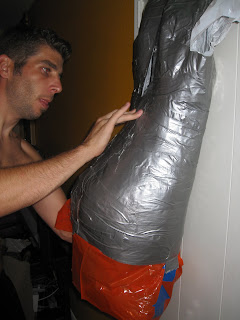 I’m pretty sure Nora (she has to have a name) needed another few layers. I couldn’t do that, because of the freak claustrophobia outburst, plus, I had a freak delusion that that extra layer would r e a l l y ‘pudgy’ me up. The rubber fumes went straight into the bloodstream I think.

I read online that the form when taped together can stand on it’s own. Nora can’t stand. She collapses to the floor and her boobs cave in.

I stuffed her with balled up trash bags I had from Coastal Clean Up Day 2009. All wrong. Trash bags are slippery, and it was OK once I taped up the bottom, but when I went to dress her she was soft and pliable and the boobs wouldn’t survive under any pressure.
Note the ominous writing on the bag: 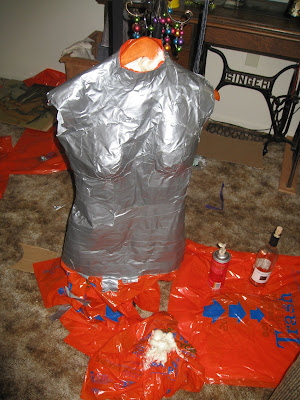 Next stuffing idea was newspapers, of which I didn’t have enough.

Next came the insulating foam stuff, that was on sale at Ace for $2.99, the stuff you spray into walls and it hardens into foam, and you can cut it with knife.
I expected it to expand all over the place, but was disappointed. No duct tape went flying through the house, and Nora didn’t morph into Dolly Parton. One can barely filled up her shoulder.
The good thing is the hanger is now fixed in there. It’s in there all crooked, but I’ll take it. The stuff is vile, and once it gets on your hands, only a good cancerific bath in acetone takes the edge off. The formal instruction once it gets on your skin is to “wear off with time”. That tells you something.

I think because the duct tape form is too thin and soft, the foam may have blown the once stuffed boob out of shape. Not because it expanded so, but because I had it hanging awkwardly so the foam mass would stay in the shoulder, and once it hardens, it makes the duct tape take its shape. It also sticks to the inside, so I can't really wedge the nozzle in the there and pump more foam.

Before I continue I will wedge a piece of cardboard horizontally where the rib cage is, to keep the form from expanding into a round shape.
I will finish this up, and see how it turns out. I think if it’s a complete failure, I will try again, get more layers on, so I have something stiffer to work with. In all other aspects I really like the foam deal – if I decide to have it on a stand, the foam will harden around it and keep Nora fixed.

UPDATE: Nora has hardened up. I'm loving the left side. The right side speaks for itslef. 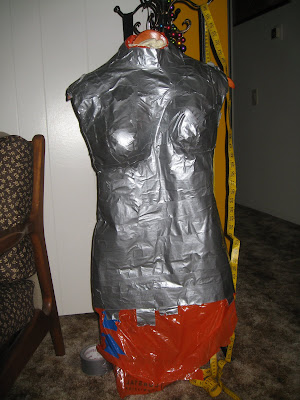 The aerial view doesn't do her any favors either: 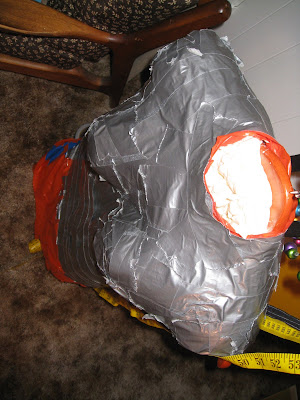 I didn't fill up the bottom, it took me two cans to fill up the torso, and the boob situation is pretty evident, so I don't want to dump 3 more cans in in vain. I'm deciding if I ought take a knife to her and go all Michael Angelo on her and sculpt me a new boob. May be. I can't throw things away, so I may keep it in garage for next time boredom overtakes me and I want to take a knife to something. I think I can take duct tape off, spray more foam on, wait for it to harden, sculpt away, then cover with duct tape again. Or just decoupage over with some pretty fabric or wrap paper, which is what I'm after ultimately.

Coming up next, Attempt Deux, May Be With Paper Tape This Time a.k.a How Much Worse Could It Be
Posted by Snork Maiden at 23:40