We long wanted, (I did and talked Jesse into) and finally decided on a colour to paint the living room wall. The TV has to go up on it (I'm still pushing for framing it in some awesome old frame and painting some crazy colour inside, but, we'll see how I fare in negotiations). I even remembered an awesome frame at a place called Debbie's Attic (affectionately Debbie's Dumpster) in Northern California, and sent my stepmom who lives near there to take a picture/ dimensions. I'm nothing if not dedicated. 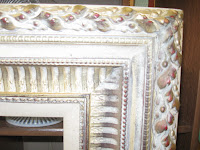 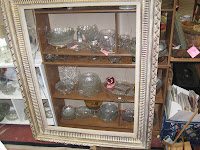 Anyway, Jesse brought home all the ridiculously cute little swatches (I wanted at least 4 colours and all the 9 available shades of purple) and after 3 day deliberation we decided on Golden Nugget, a warm orangy yellow, regarldess of how obnoxious the monitor shows it:

I thought it would go well with the gold in the Green Curtains, the yellow in the Mini Couch, and when I finally get to sewing purple pink cushions for the Danish Armchairs, they'd look brilliant against it. I tried very hard to also work in a royal purple somewhere in the room, but got shut down. Jesse 1, Julia 0.

I had a mild panic attack when we got to Ace Hardware, complete with hallucinogenic in-brain flashbacks of the colour wheel, and decided the wall had to be a salmon pink, to complement the Green Curtain Wall.
Salmon Pink - vetoed. Jesse 2, Julia 0.

Then there was a cold feet episode, as I tried to make out of Ace with 3 jars of sample paints, none of which were Golden Nugget, and yanked at Jesse to go "paint stripes on the wall". Luckily, he largely ignored me, and walked out of Ace with a Benjamin Moore Egg Shell Base Golden Nugget Paint bucket and rollers.
One Sunday afternoon later: 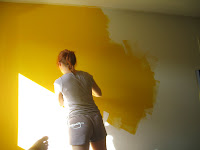 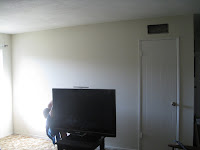 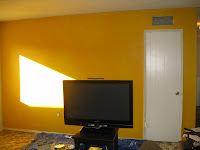 We slapped on the 2 manufacturer suggested coats, and went out to JoAnn's to track down Simplicity 8125 Pattern I read about on Chronically Uncool Blog. And Barnes and Noble to look at quilt books (it'll probably never happen but I like to plan). I called my mother to update her on the 'rentmodeling' "Oh, like psych ward walls?".
No. Like sunflowers. Like sunflowers on the Mini Couch I have, and like pure, sunny, rainbowy, beachy happiness, despite what Dostoyevsky and whoever else wrote. Pffffth. I'll make my own symbolism.

"I feel like I ought paint a black line and spell out "Orange County Unified School District" was Jesse's first impression.

"Holy pumpkin sht", Was mine. I went fetched a pumpkin from kitchen to compare and indulge myself fully in the horror, but it was anticlimactic: 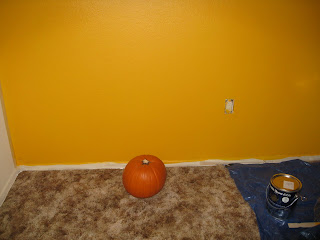 I's beginning to come to terms with it, although I'm sort of hoping the TV and whatever artwork I throw at it blocks quite a bit of the yellowness. Jesse is pretty pleased with it, which is also suspicious.

Now, I'm negotiating the possibility of glitter gold paint inside the Old Frame space behind the TV (Who cares, it'll only be a few inches, you'd think I was trying to paint his bathroom hot pink. Twitchy critter.) I didn't even know there WAS such a thing as Glitter Gold Paint (Thanks, H!!) And it makes me feel sad I didn't explore the "painting techniques" before this wall. But, wait - I'm all over the dining room wall. I'm thinking wine red, with black sand mixed in, and possibly still, the glitter gold. I'm picturing an epic triumph of astoundingly beautiful, faint inducing, albeit deposit sacrificing home decor. I would also like to use the remainder of the yellow paint to paint "swirls" on the opposite/hallway wall. No dice so far.

The almost put back together living room - with Green Curtain, Almost Upholstered Danish Chair in Perfect Pink or Purple, and the TV that started this whole thing to begin with: 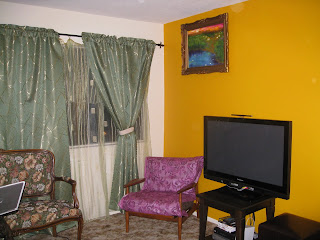 In a related story, and while Jesse is furiously measuring (yes, in inches) the distances between armchairs, wall and armchairs, the TV and armchairs, to mathematically try bring sense back to this room, I think my next project will be copy-painting this painting I saw in a gallery during October trip to Chicago:
I can practically hear the crazy yellow wall call for it. 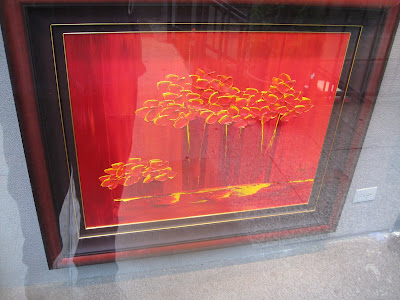 For now, the Wall is housing an unfinished Pond/Cattail Village and Paint copied Julie Hensley Adams' Sleepy Chick With SeaShells by Window paintings. (Painting idea and the original are hers, the copy cat execution and naming all me) Picture the TV up a yard and floating in an awesome old frame. With glitter inside. 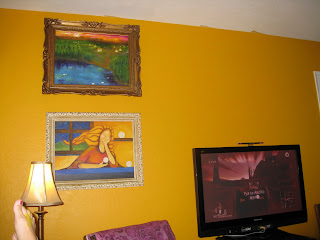