Back when Mouse was small, Littlest was nonexistant, and I had all sorts of crazy ideas, like, I thought I would cloth diaper.  Never did I, but I did sew a couple diapers that I did let Mouse wear them as long as she promised she wouldn't poop.  (She was a liar), and I bought all kinds of PUL fabric to sew 8 million more.  A JoAnns near me going out of business was a catalyst of sorts, because everything was 90% off.   In addition to diapers, cloth diapering saintly moms also use wetbags, to store these wet diapers, which unlike their 20 cent Pampers counterpart, must be taken home with you, to wash.  Because they're expensive.  And adorable.  But mostly expensive.

Since I never really got into cloth diapering, it was never really an issue.  But, when I was potty training Mouse, (mostly by denying her pampers) her teacher would hand me, at the end of the day, her 'accident clothes',  And for MONTHS, I was like, man, I should really make a wetbag.  Because sometimes the Safeway bag I had them in would mascarade as a Safeway bag holding something else, and then you forget about it, and open it a few weeks later, and WHOA.

How cool would it be to have a bag, or two, that would scream WASH MY INSIDES as soon as you see it in a crowded vehicle?  It would also be handy to store wet bathing suits for the trip home from beach/pool..gym?   That, and I do have Littlest coming up to potty train.. any second.  More accident clothes.  So, while she napped today, I did this:

I would have preferred a long and narrow design, but I worked with the precut pieces I had (22X24) and the matching 18" zipper I found.  So my end result was 11" x 18".  The zipper is really what determines width, unless you're willing to stitch over it and cut it.    I boxed the corners, so it would stand on its own, just in case I need it to, while I toss swimsuits in it from across the room? 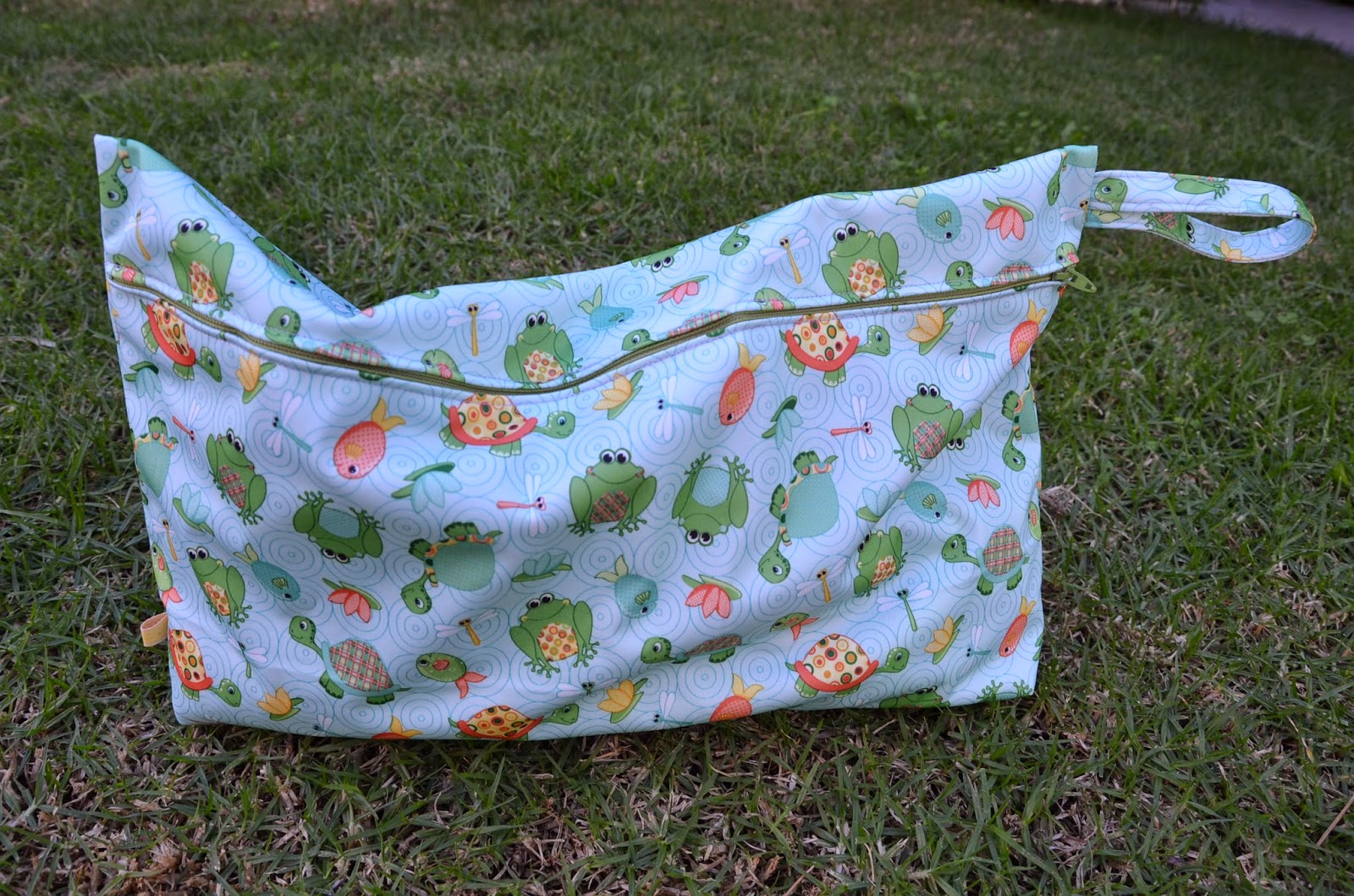 And I used french seams, though I wonder if it's worth the trouble.  PUL doesn't seem to ravel, ever.  I prefer this design over others, because there is not weird zipper bulge on top, it gets sewn on, and then sewn into the side seams, seamlessly.  You can also fold a flap down and stitch to cover the zipper, but I had no vertical inches to spare. 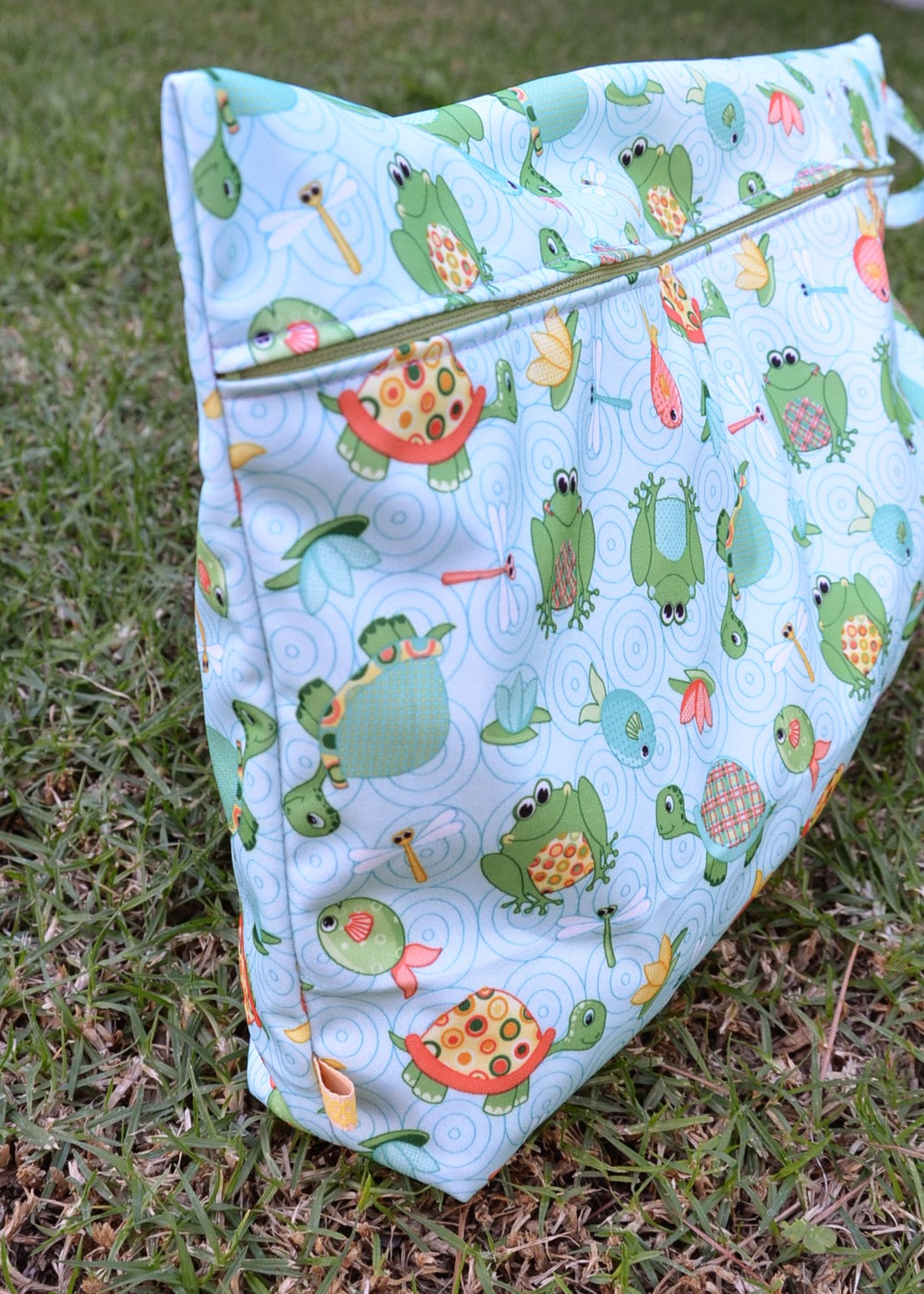 The good news is, I have a ton more PUL for this kind of thing.  Bad news is, I can only make use of so many wetbags.  Pinterest once spoke to me about reusable snack bags though?.. 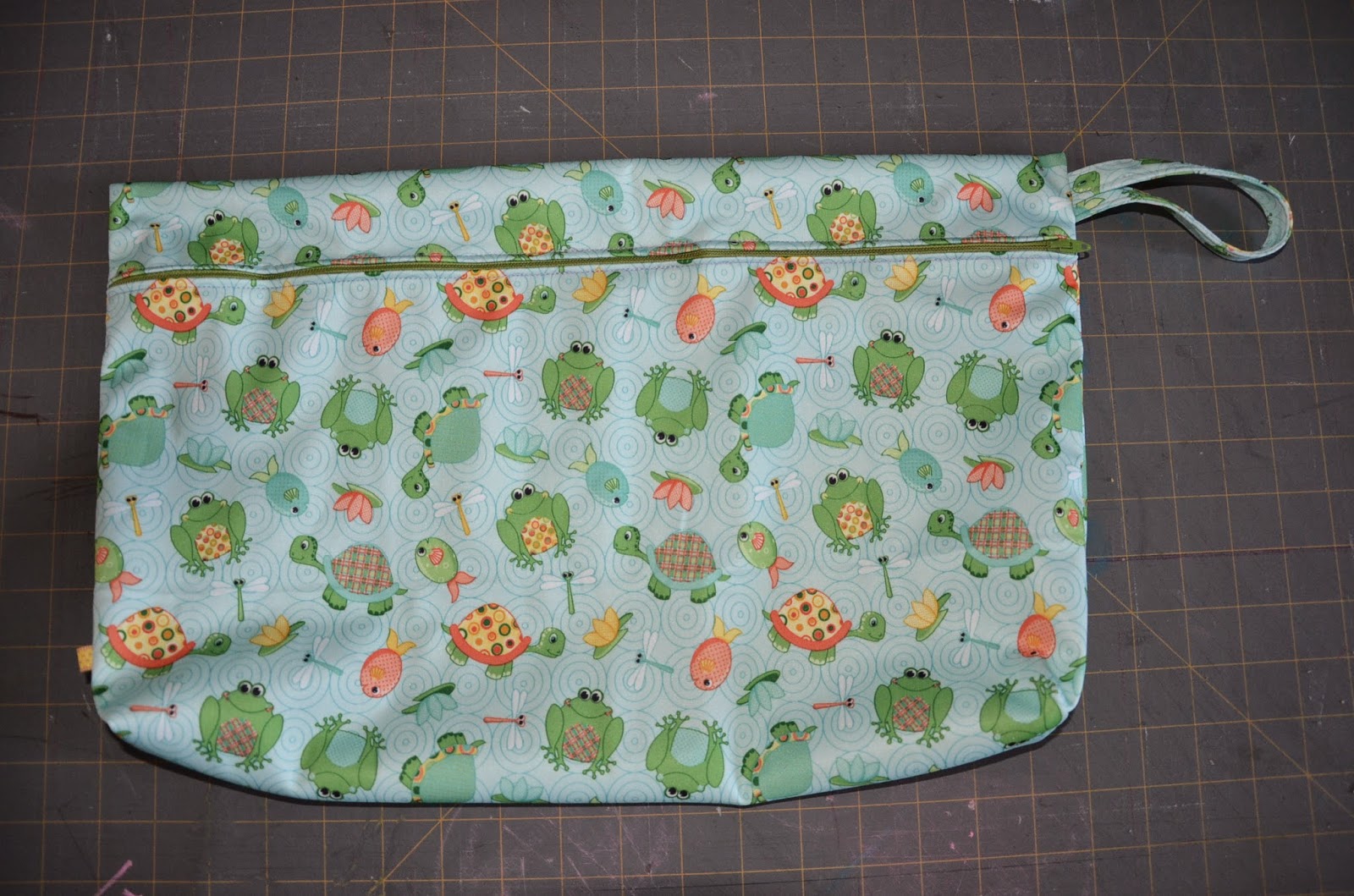 While I was busy using up PUL, I made another pee pad.  I had made one earlier, in critical potty training stages, and it was great.  It's just PUL and two layers of flannel.  It makes it heavy enough that it doesn't shift around, and absorbent enough to keep her bed dry.  It's wide enough to tuck around her mattress securely.  Recently, her Godmother has kindly provided us with a truckload of disposable ones, so this was really just a matter of finishing a project.. 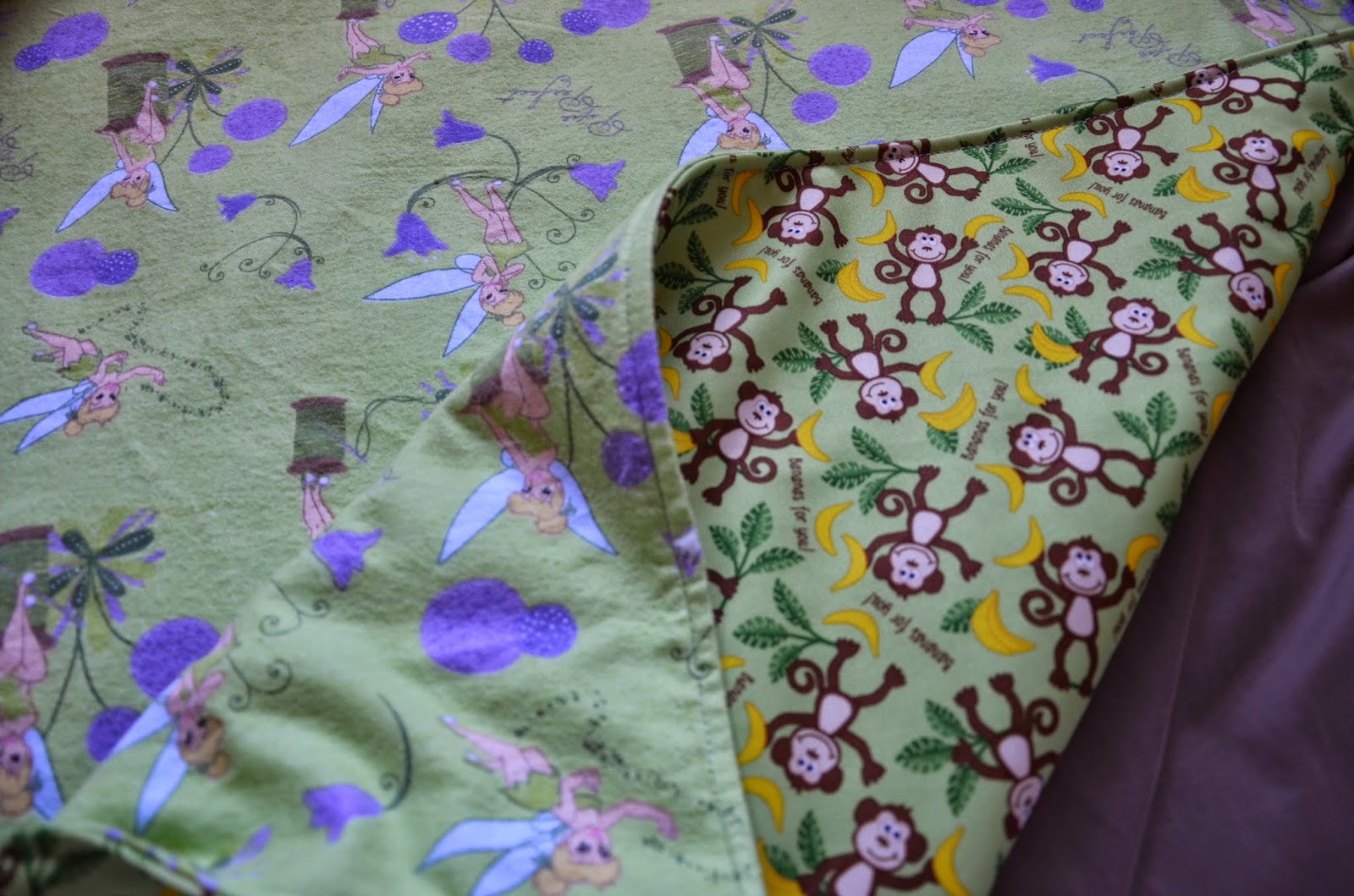 ...because I had finally found a use for all that Tinkerbell flannel.  Back when we'd still have frequent accidents, we would take it out from underneath her, and because I never got around to making another one, we'd replace it with just a piece of PUL and a piece of free floating flannel.  Sorry, Mouse.  Mommy has too many hobbies. 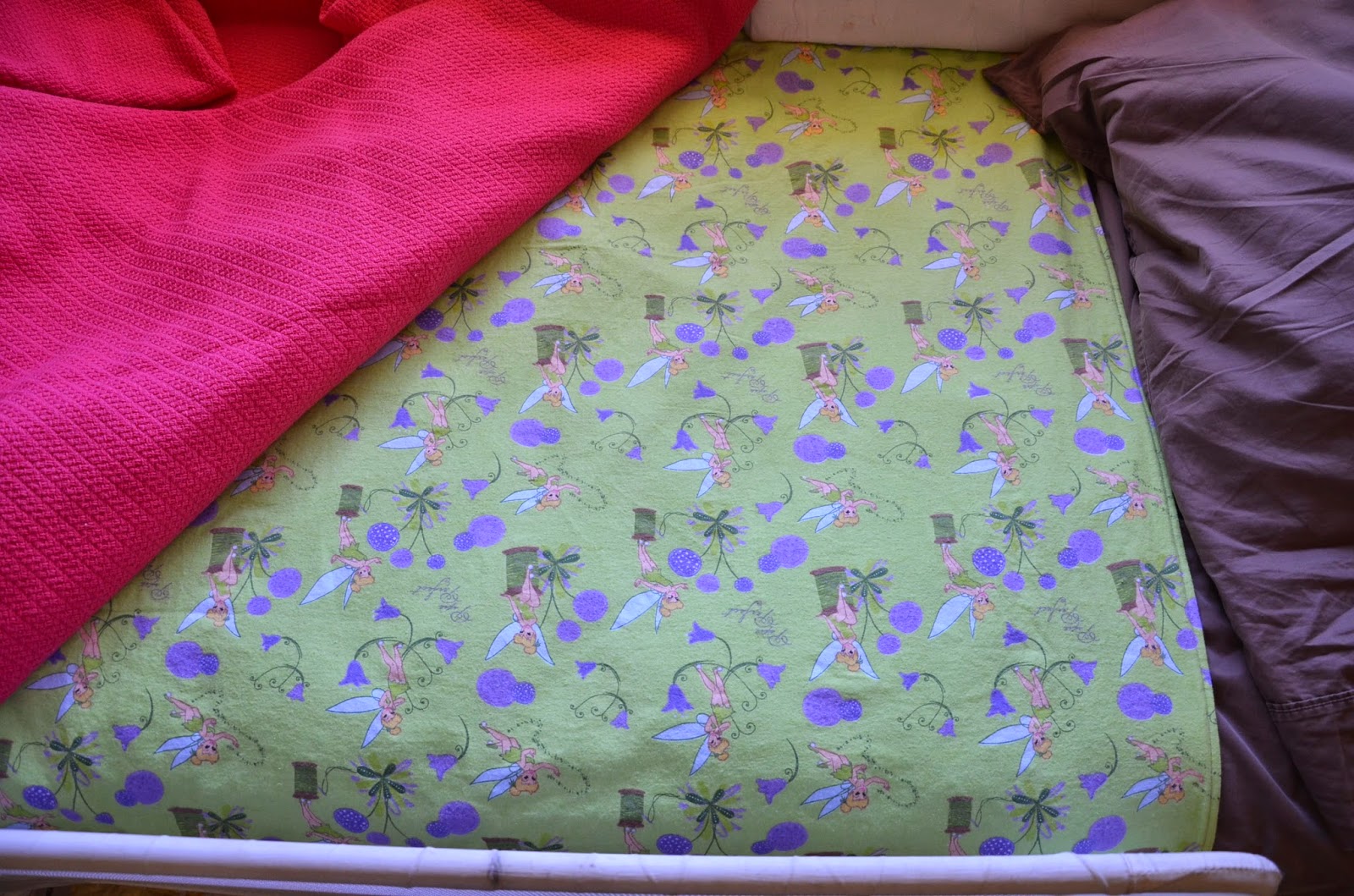 But there's still Littlest.  And Tinkerbell is adorable. 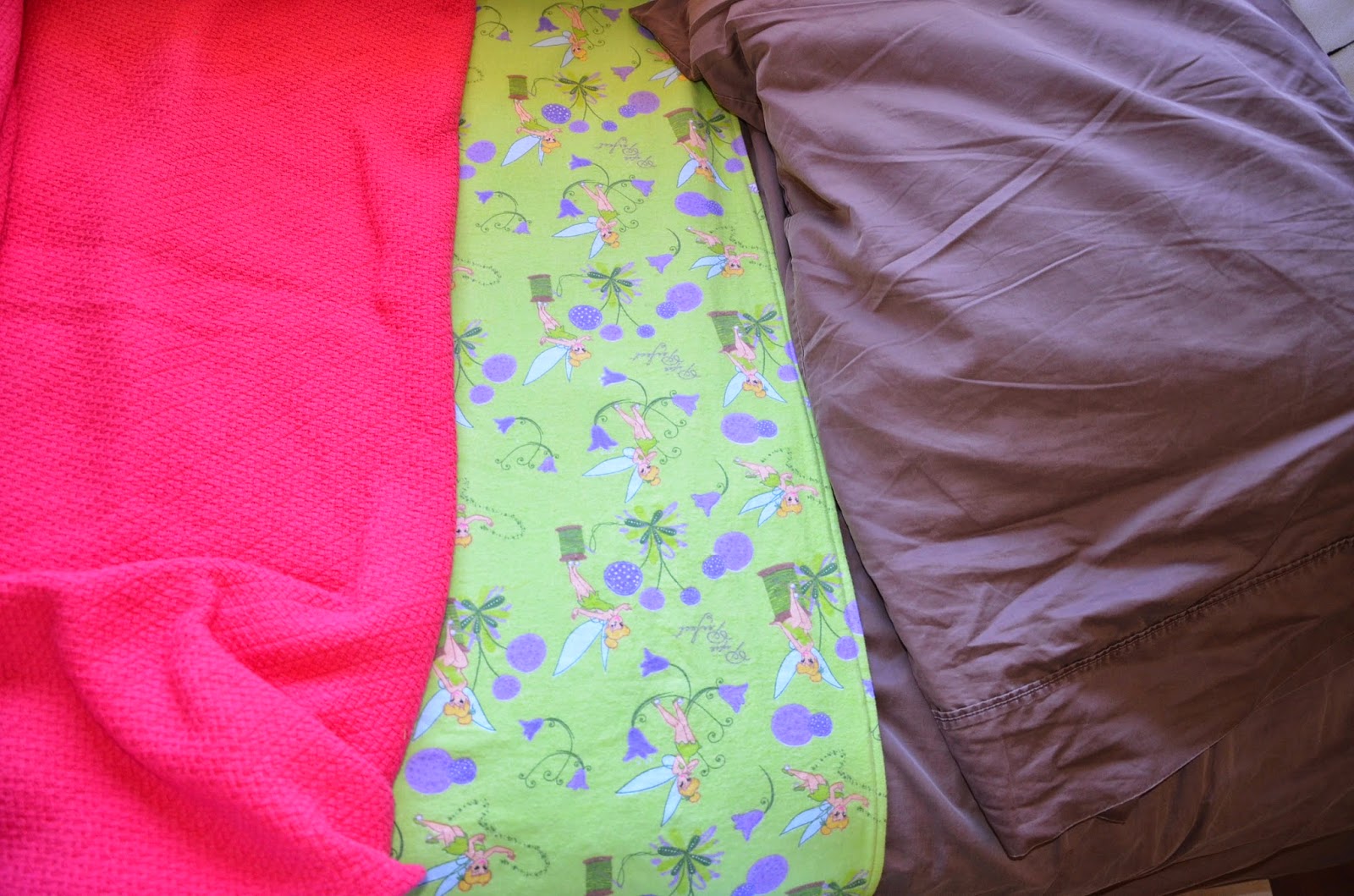 It can also be a giant changing pad, or even an outdoor blanket for baby.  Just stitch three layers right sides together, leave a hole, turn, and topstitch all around.
Posted by Snork Maiden at 21:28