Pinterest will be the death of me. (Doll Quilt #2, with Pouch)

Sometimes it works in everyone's favor, like the time I came across One Pot Mexican Quinoa, but usually it's pretty self serving, knitting patterns, quilt patterns that end up costing real, actual money, and time.  Time that Mr Snork has to volunteer to occupy the anklebiters so they don't unwind my bobbins while simultaneously trying to puncture everything in site with a stolen seam ripper.  (They stole it from me, it didn't start out as stolen).

The other day, right after dropping off a baby quilt to my longarm lady, I came across this: Literally, just after I sent the other quilt on its way, and it was a good time to wash some dishes and address that shady lower drawer in my fridge.  But, alas.  Pinterest never leads to dish washing.  And rarely to the lower fridge drawers, since it is not where I keep quinoa and enchilada sauce.  It leads to this: 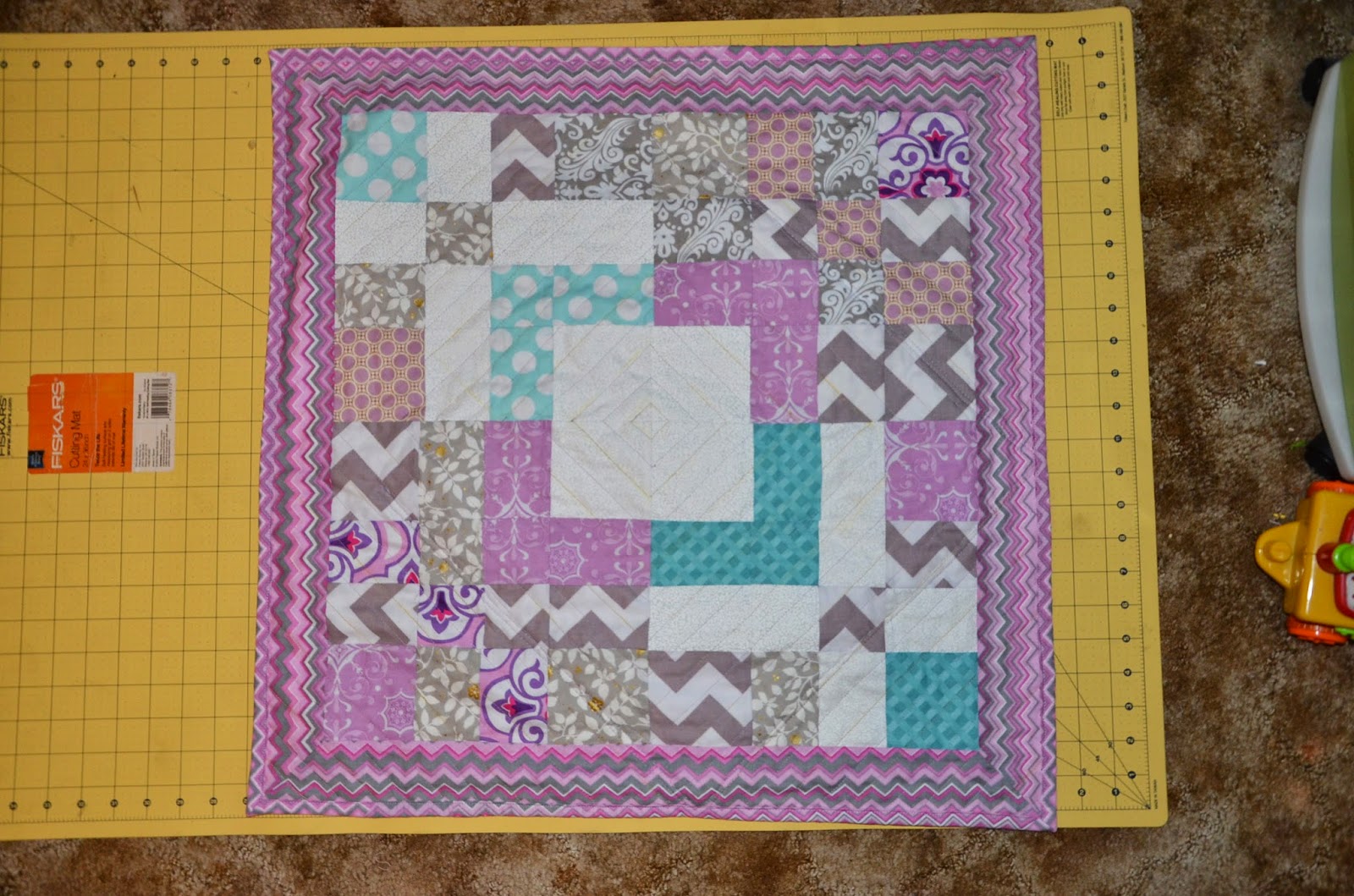 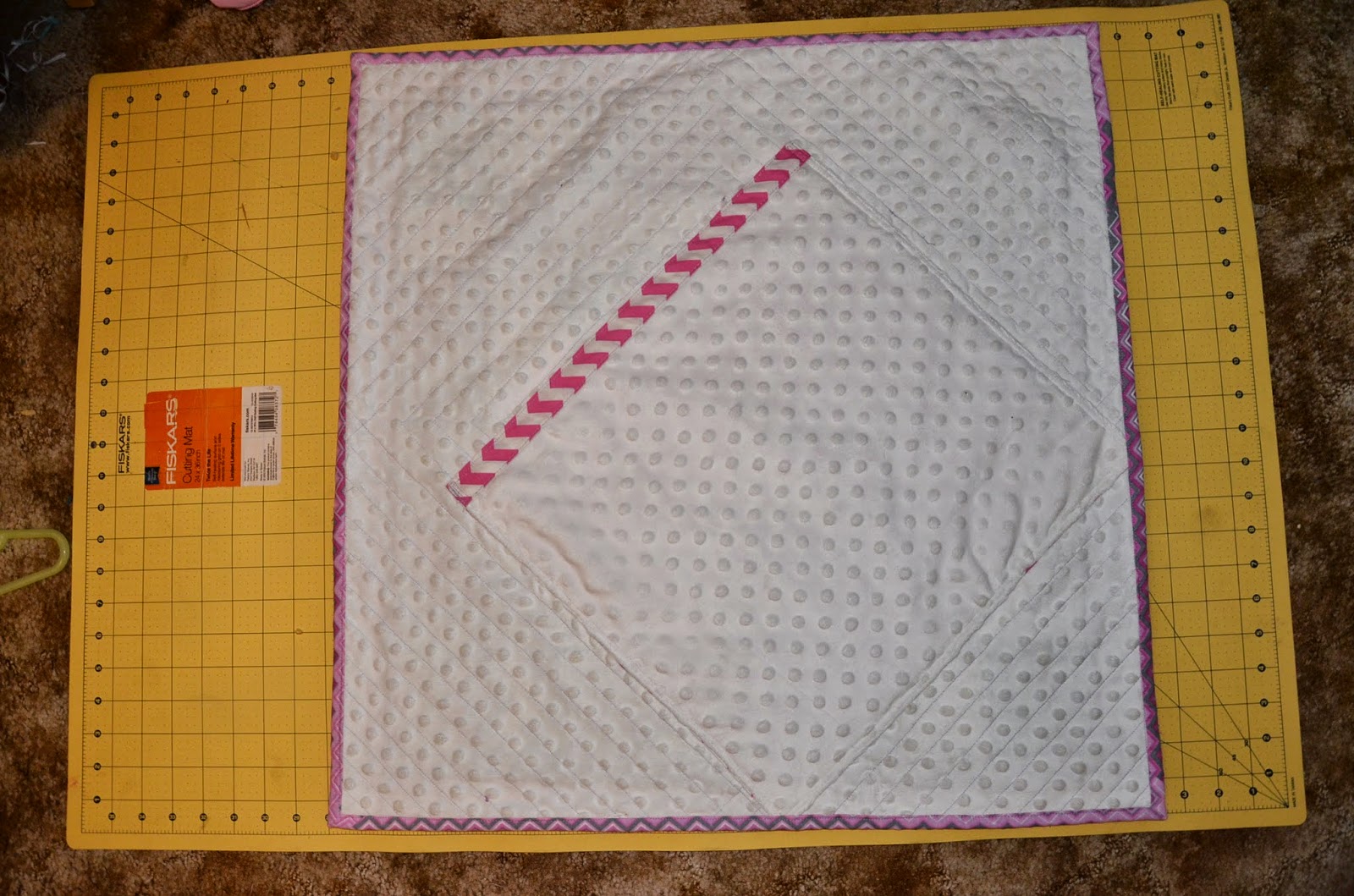 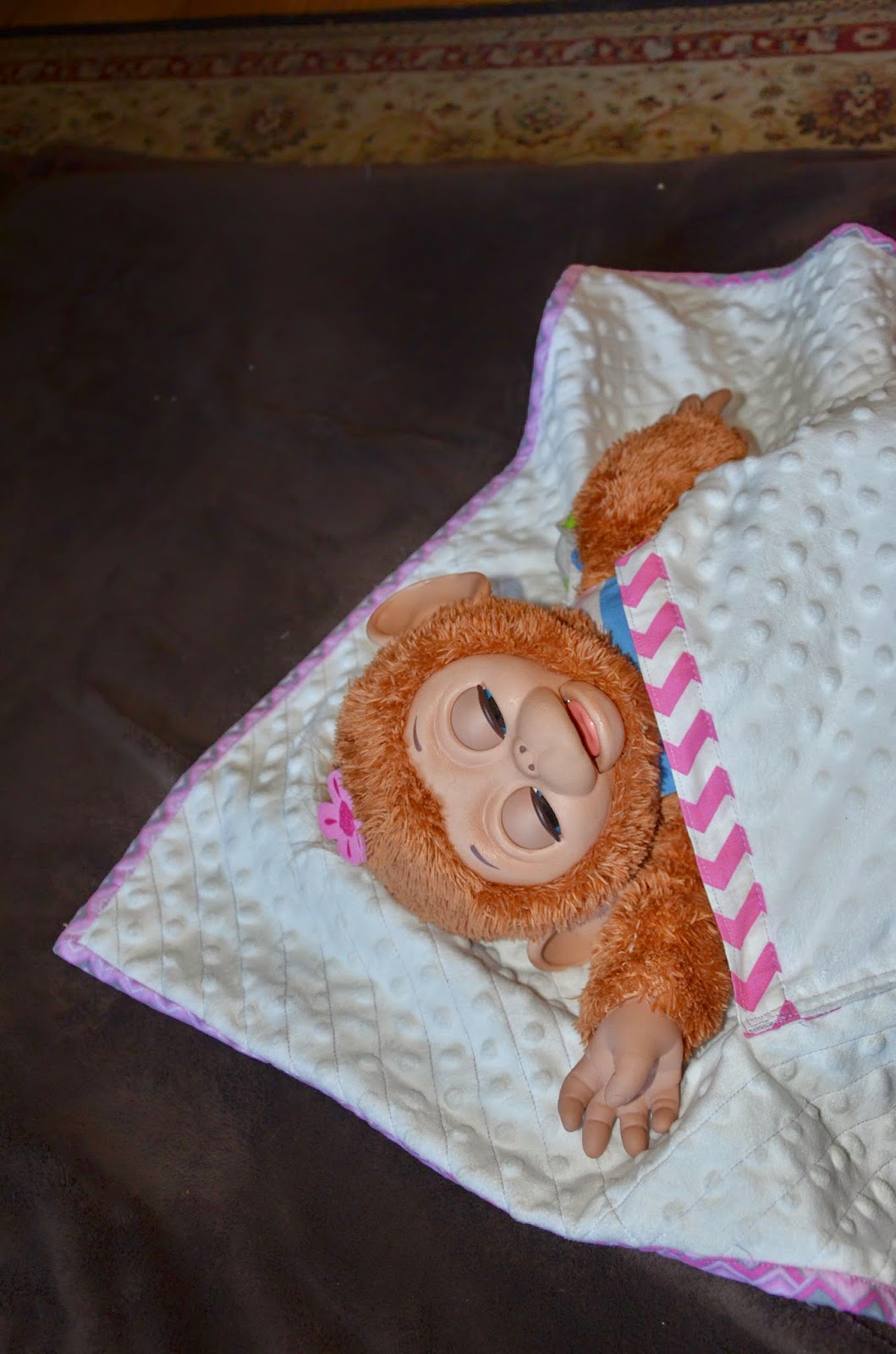 And ultimately, the best part, this: 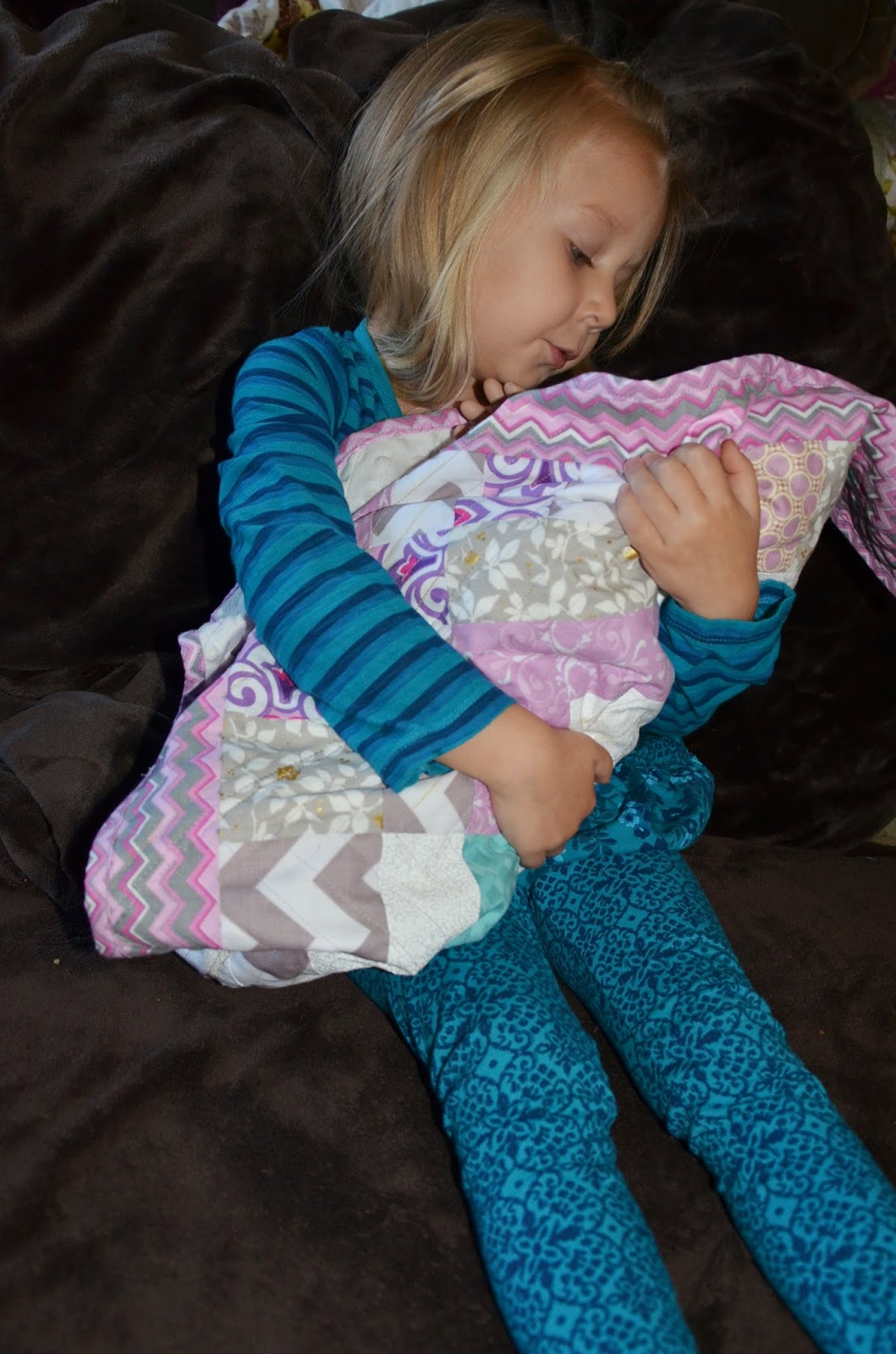 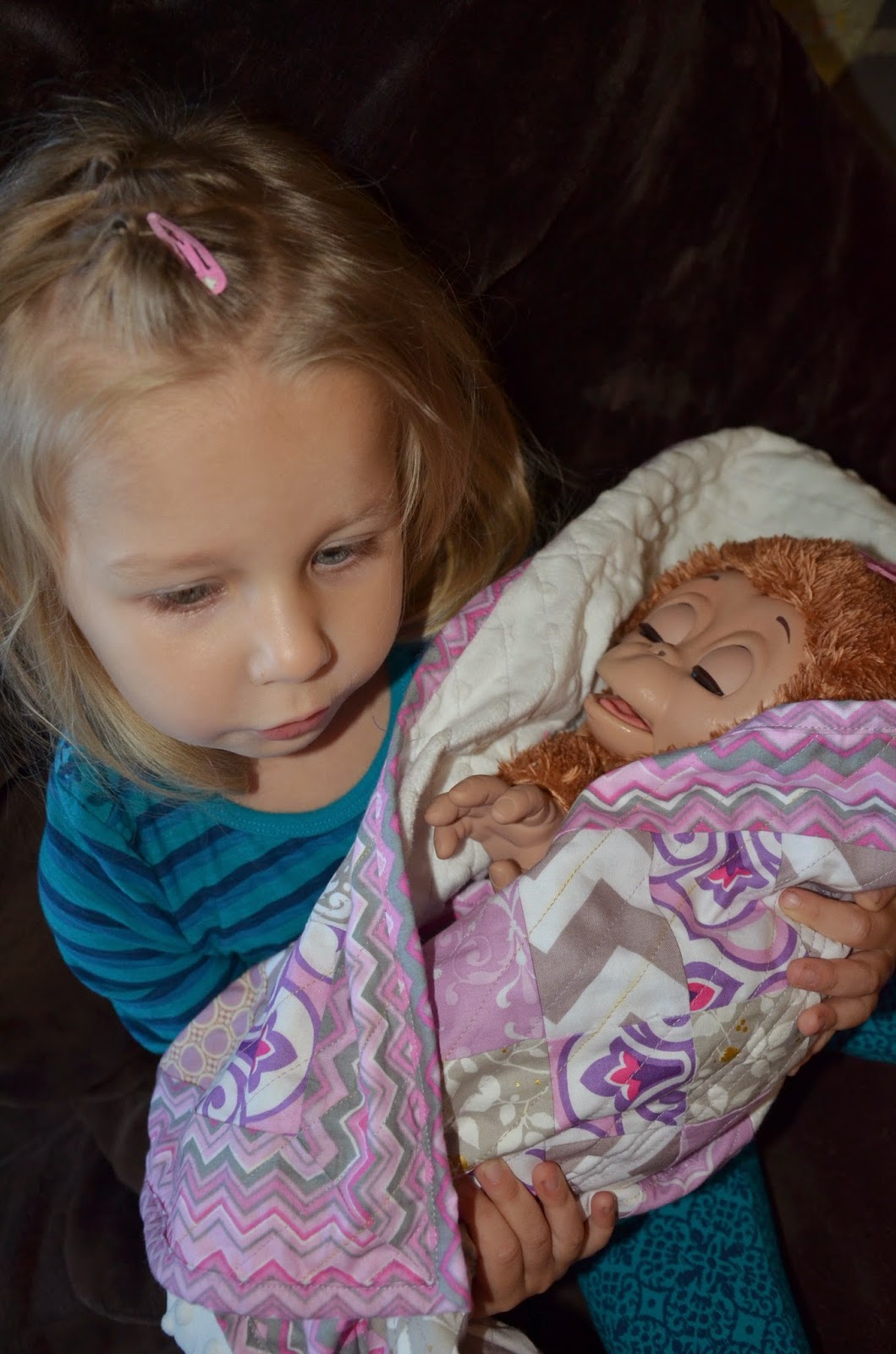 And it would be awesome if I was pulled together enough to make this in a couple hours, like Pinterest said I would.  But Pinterest didn't know that instead of using any cute fabric, I'd HAVE to piece a mini quilt out of scraps from the recent baby quilt.  (It's kind of adorable to have a doll blanket matching baby cousin's blanket?)  Then I'd HAVE to try some sort of a new pattern (disappearing four patch, which, FYI, doesn't work if you use all the colors ever created.  If you can't commit to a solid color to pull it all together, you may as well just four patch and skip the disappearing act).  Then practice mitered border corners.  (that was actually cute).

And the fact that my Singer 301 wouldn't have anything to do with minky fabric until I read all the forums and went to JoAnn's to get some ballpoint needles.  Picky, picky.  I don't know how a 60 year old machine knows what needle is jabbing fabric down there, but apparently it does, and if it's not the right one, it gets super offended.

It was kind of worth it though, because historically the doll quilt and baby quilt I have made for the girls don't get used, ever.  Mouse says it's not a "real blanket".  Apparently, the REAL, made in China, preferred blankets of this household all have some sort of a fleece side.  And now that I know this, and  incorporated that in, it is Eva the Monkey's new favorite. It's been a long time since something I've made got picked over it's Chinese counterpart, I'm pretty excited. 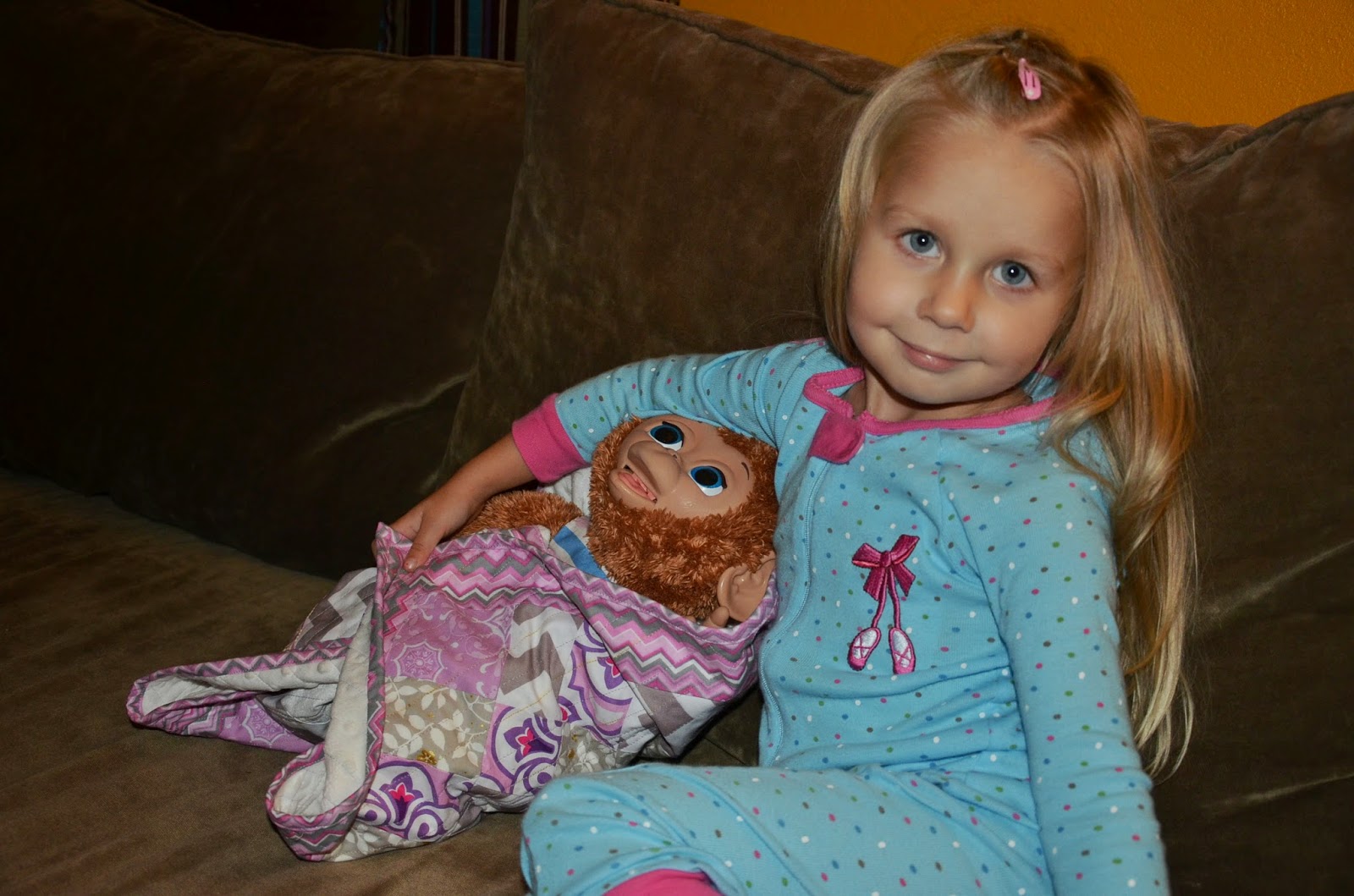